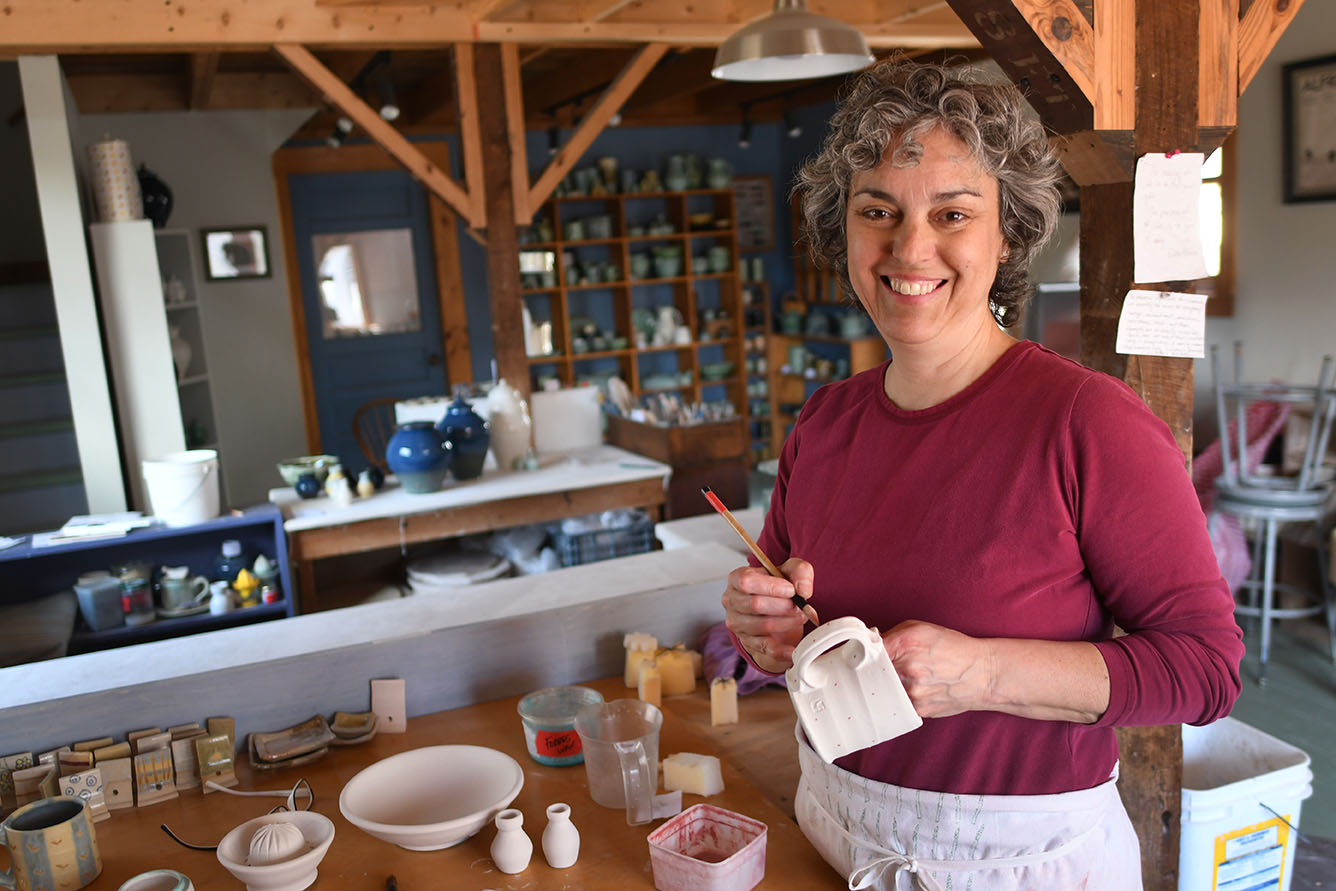 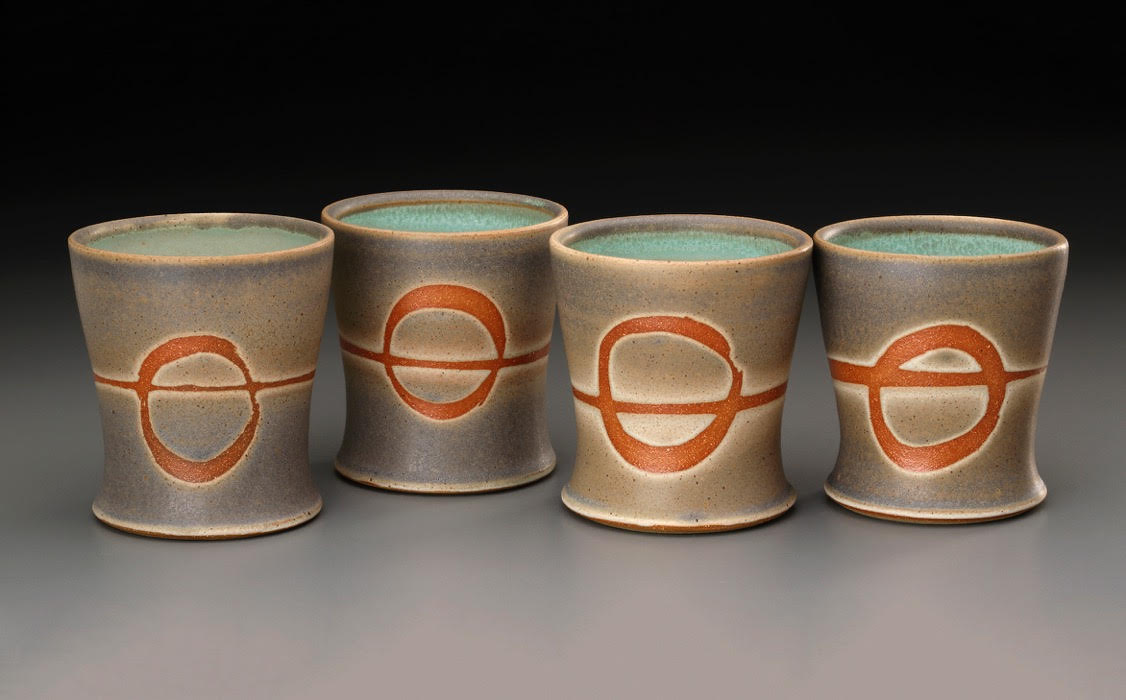 Pottery by Tiffany HiltonThis year, the tour is both a virtual online sale and an in-person, outdoor event. In an abundance of caution concerning the pandemic, they have postponed this event that ususally happens earlier in the spring to June 12 & 13 and will comply with CDC, state and local guidelines for outdoor events. For pottery fans near and far that prefer to shop from home they will will launch an online opening Friday, June 11th at Noon ET via the website: www.apotterytrail.com.

The free, self-guided tour takes visitors throughout Pioneer Valley to see the work of 20 ceramic artists at 9 studio locations with guest artists joining us from Maine to North Carolina. Visit the website for more information about artists and locations.

The studios are located along the Connecticut River Valley, but the changing list of guest potters each year come from all over the country.

“We’ve had great potters come from all over the country,” says Tiffany Hilton, who is one of the artists who helps to promote the event. “It’s a great way for people to see where the creative process takes place – and (to see) the lifestyles of our artists. We also have a lot of hobby potters and student potters come around to get inspiration,” she said. 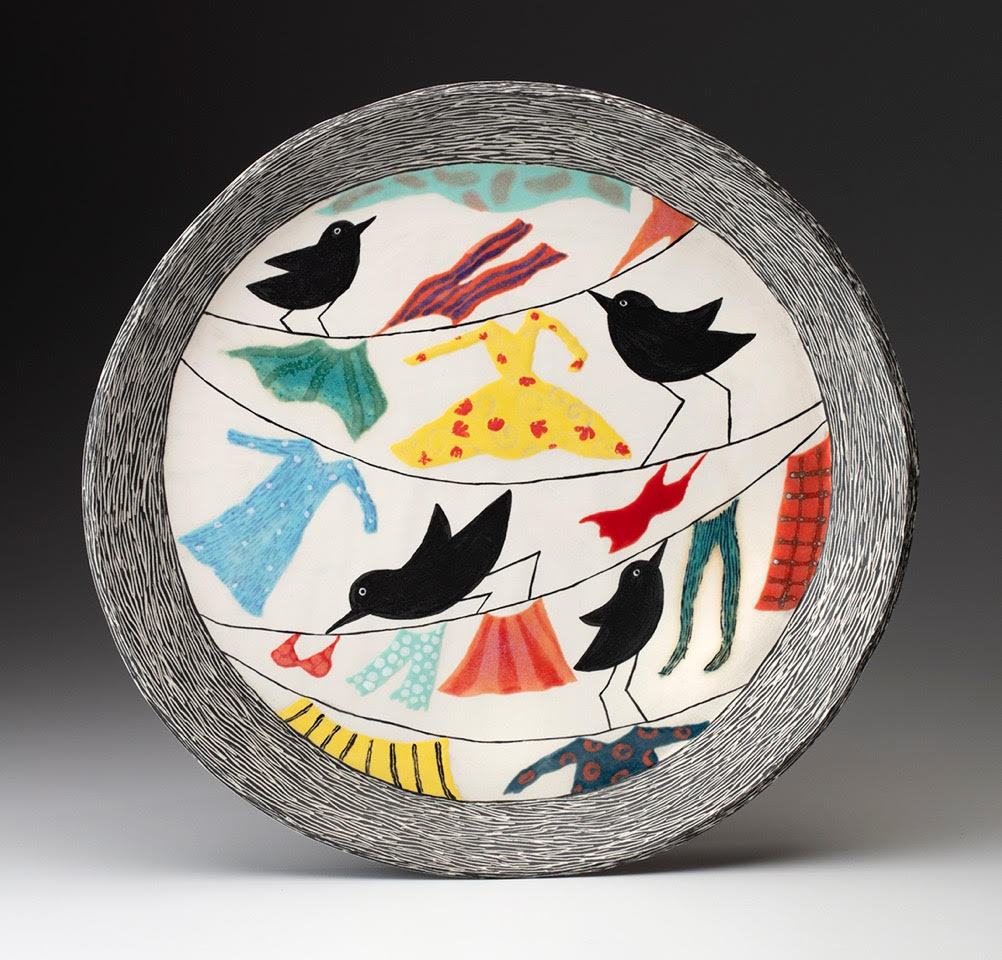 Francine and Frank Ozereko run Ozereko Pottery Studio in Pelham. Among the collectors of Francine’s work is Supreme Court Justice Ruth Bader Ginsburg. Francine said the judge bought cups from her several years ago, and they made a cameo appearance in the recent documentary, “RGB,” in a scene in Bader Ginsburg’s kitchen.

“I didn’t know about it until one of my students saw the movie and texted us a message,” she said. “We saw the movie the next night.”

Bader Ginsburg has since bought more of Francine’s pottery. Her wares include bold, dramatic black-and-white ceramic platters, vases and tripotychs. 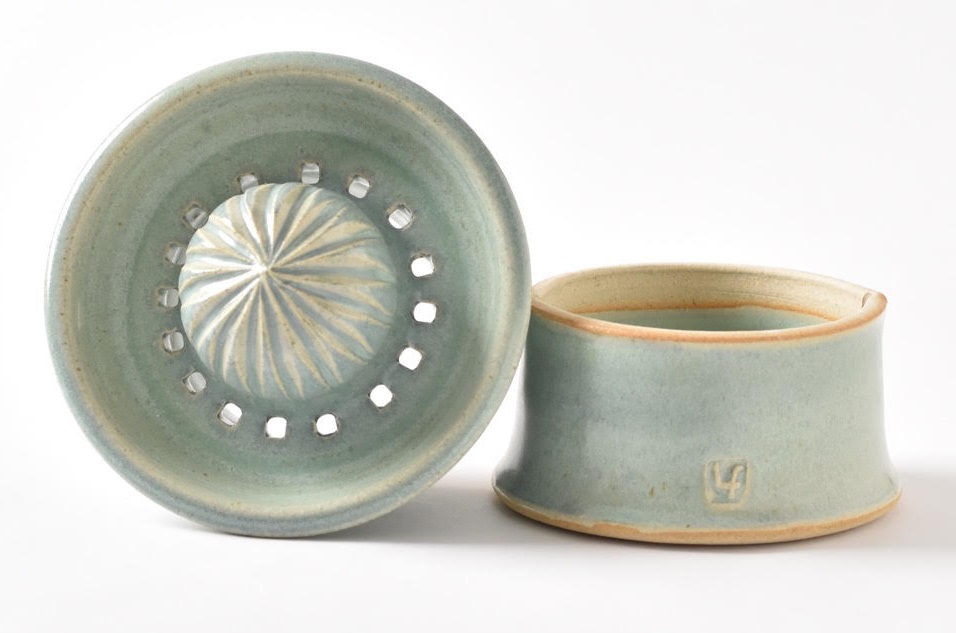 Lucy Fagella PotteryFor some visitors, its hard to visit all the studios in one day, so many make a weekend of it, staying in bed & breakfasts in the region.

“Every other year, the potters do the tour on the Friday before – just for us to enjoy everybody’s pottery and see each other’s work,” says Tiffany Hilton, whose pottery studio is based in Florence. “It’s a beautiful drive between studios.”

“We start in Pelham,” says Hilton. After seeing new work by the Ozerekos and their guest potters, Hilton advises traveling north on Route 63, driving through the farmland of Sunderland and Montague before coming to the Northfield studio of Tom White. 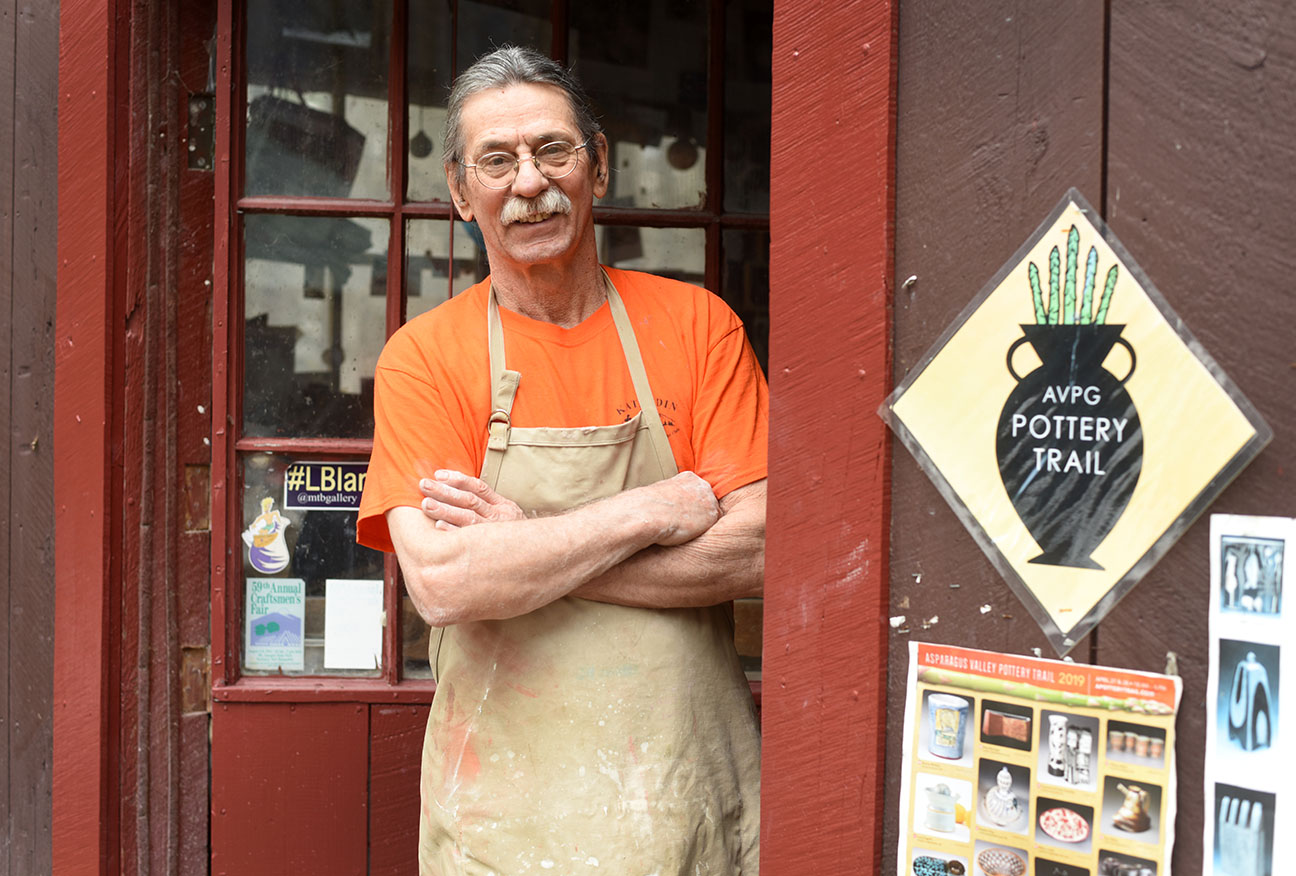 Tom White in his Northfield studio. Paul Franz Photo“Tom’s almost got a village – with a kiln shed, gallery, food and music, and his guest artists,” says Hilton. “He really makes it worth your while to visit.”

Tom White, a 35-year potter, fires his pots with salt, soda and wood. The studio will offer demonstrations and a chance for visitors to try the potter’s wheel. Grammy-award winning musician Steve Katz, a founding member of the musical group, “Blood, Sweat and Tears,” will perform with the Fiddlin’ Chiselers at White’s studio. Katz’s wife, Alison Palmer, is one of White’s guest potters this weekend.

“Then you drive from Tom’s to another beautiful route – over Route 10 and stop at Lucy Fagella’s in Greenfield,” says Hilton. 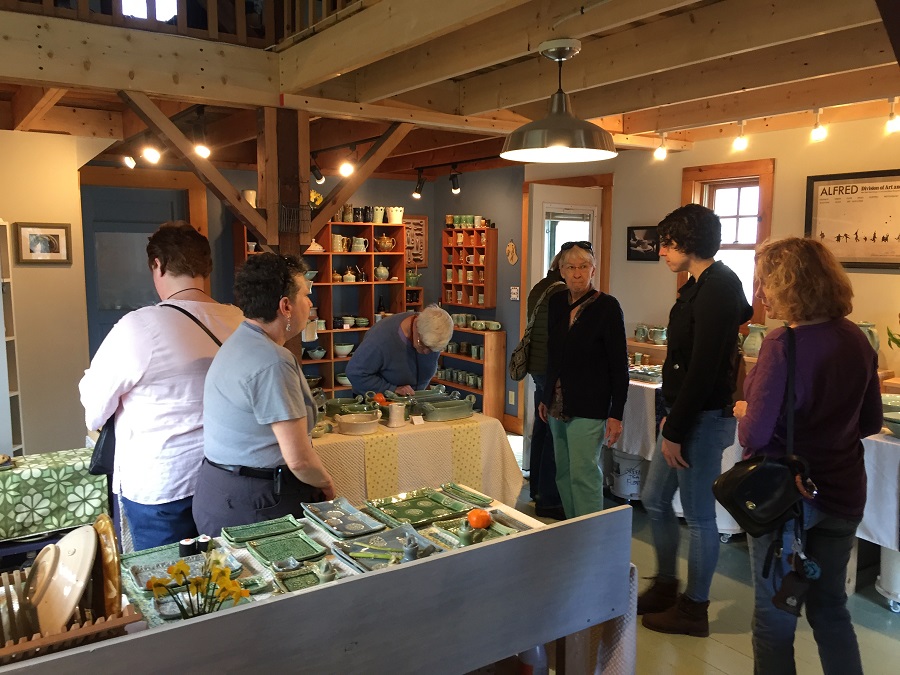 Lucy Fagella’s love of food and garden shows in her pottery for the kitchen and the table. Fagella also produces elegant cremation urns and memorials -- including biodegradable urns that incorporate textures from nature.

From Greenfield, Hilton recommends hopping onto Route 2 and heading west to Shelburne Falls. With three potters’ studios all within walking distance, pottery viewers will have a chance to “stretch their legs” and walk to convenient eateries along the way.

After Shelburne Falls, take Route 112 South through Ashfield and into Florence, a section of Northampton.The tour will offer a rich and varied range of wheel-thrown and hand-built ceramic goods and artwork for tabletop, home, and garden; as well as the opportunity for visitors to talk one on one with the artists about their work and inspiration. For 2021 there are a few changes in order to host the event outdoors which include two new locations for hosts Molly Cantor of Shelburne Falls and Tiffany Hilton of Florence. 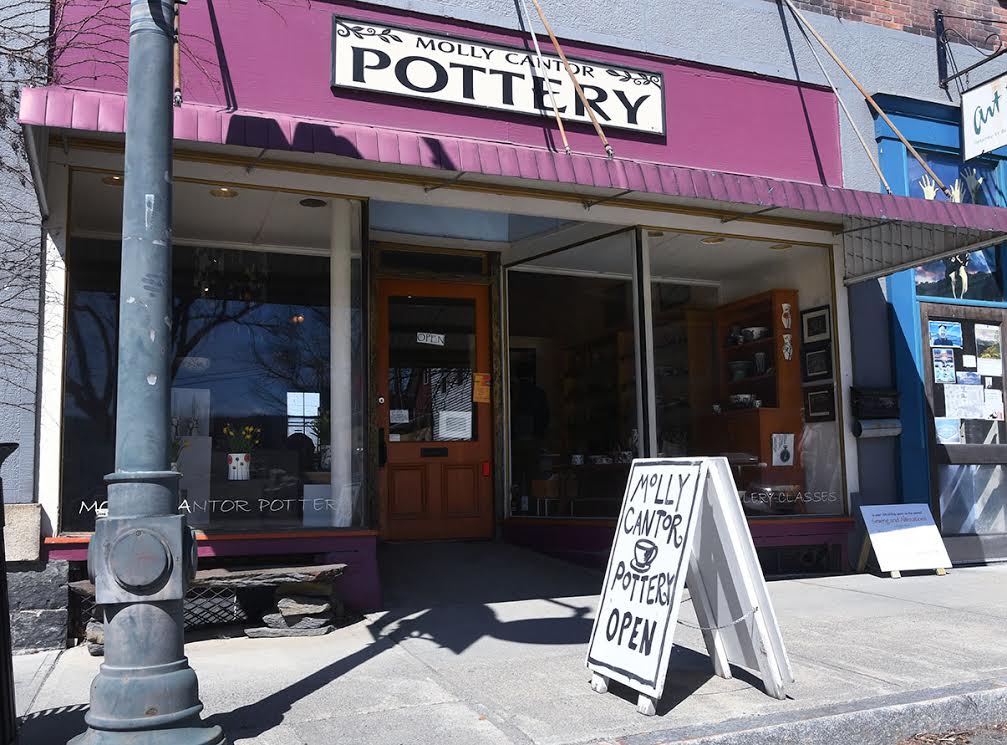 Molly Cantor Pottery. Paul Franz PhotoFrom there, travel to Hadley to see the East Street studio of Donna McGee. She makes earthernware pottery with lively drawings and paintings on the surface.

Studios may be visited in any order. Look for bright yellow “Pottery Trail” signs along the way to guide you. Many of the clay artists, both local and visiting, are nationally known, and will be happy to answer questions. Many studios will have music and refreshments.

All the potters will have items for sale and are happy to answer questions. Much of the trail is accessible by Interstate-91, less than two hours from Boston, three hours from New York City, 50 minutes from Hartford, Conn., 30 minutes from Springfield, and about 90 minutes from Albany, N.Y.