Fly fishing on the Deerfield River

We know there is great fly fishing in Franklin County and we were delighted that Michael Vito of the Deerfield River Chapter of Trout Unlimited shared with us this first-hand experience written by a visitor from Ohio last year. Enjoy! 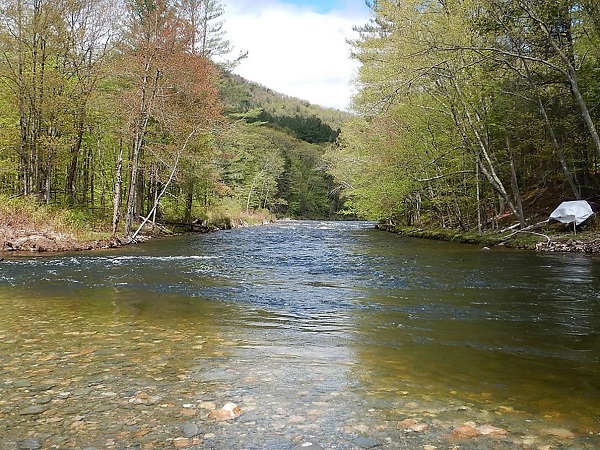 Our Deerfield River expedition had its genesis two years earlier at the South Holston River Lodge1 in Bristol, Tennessee. It was there that a group of our Bangers and Hookers met another visiting guest, Scott Meador from New York. During the visit, Scott shared that his favorite river is the Deerfield River in Northwest Massachusetts. Our Harry Singer made careful note, in that his son, Reid, had attended Amherst College, which almost borders on the Deerfield River.

Quietly, Harry made all the contacts, found the Harrison Anglers2 as guides, the Brandt House3 as our guest house in nearby Greenfield, ensuring grand accommodations, and the senior executives of the local chapter of Trout Unlimited to share local river lore. The dates are set for May 12-16, 2019 and Harry has invited both George Klein and me to join Reid and him on the Deerfield River. 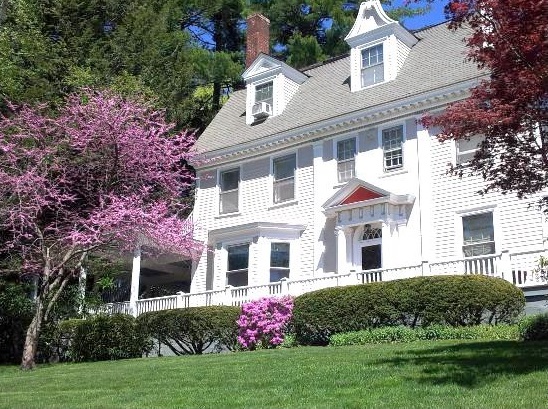 Brandt House (Photo courtesy of the owners, Georg & Angela Burwick)George and I met at the Cleveland- Hopkins International Airport and flew to Detroit, then on to Hartford, Connecticut, where we met Harry. He had rented a Suburban to ensure that all of us and our gear would fit. We’re off to our guest house in Greenfield, known as the Brandt House, where we will spend the next three nights.

The Brandt House is currently owned by Georg and Angela Burwick, accommodates nine guests, and is estimated to have been built in the 1890’s. The Burwicks take their hospitality seriously. The rooms were large, nicely decorated and clean. The breakfasts served were grand and included all one could eat.

It is still early and Harry suggests a tour of Amherst College, Reid’s alma mater, with a stop at the recently opened Beneski Museum of Natural History4. The museum is very well done, with extensive fossil and mineral collections, all in excellent displays. Reid has joined us. He is currently working in New York City with a solar energy company. We’re on our way to dinner and to meet the senior officers of the local Trout Unlimited, Deerfield River Watershed Chapter 349, to learn more about the river. This is thanks to Harry’s advanced arrangements.

The three gentlemen from Trout Unlimited were waiting for us. They were Mike Vito (Chapter President), Eric Halloran (Chapter Vice-President) and Bill Obear (Chapter Treasurer). We had a great evening, talking about the Deerfield River and the Chapter’s efforts to improve the fishing, including the challenges associated with dealing with the ever changing of flows, due to the regulation of the water flows given the number of dams.

A little about the Deerfield River: It runs 76 miles from Southern Vermont to the Connecticut River and has ten dams. The hydroelectric development started in 1910, with the last dam (Fife Brook Dam) completed in the early 1970’s. The Federal Energy Regulation Commission, plus State authorities, now coordinate water releases for power generating, recreational use and improved fish habitat. The Deerfield River has 18,000 acres of conservation easements along its banks, which makes it a beautiful, natural float. The granite boulders range from the size of trucks to gravel, and the river has waterside cliffs some forty feet in height. Add two stretches of whitewater, Class II and III, and another for Class IV paddlers and you have a beautiful, wild-looking river that is well stocked with brown and rainbow trout.

Think about this—Here is a river in a state surrounded by heavy population centers, a river with a long history of industrial development and use, and managed through complex, overlapping and competing-interest groups. What are the chances this Deerfield River could today be anything more than a polluted drainage ditch? What’s the chance for a five-star, cold water trout fishery? A salute to all involved! 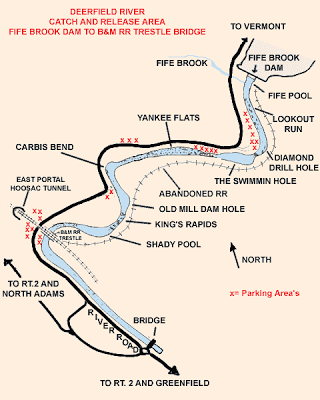 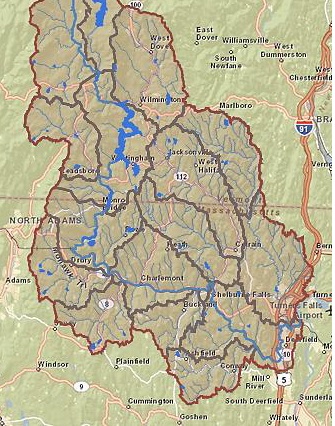 On Monday, we’re up at 6:30 a.m. with breakfast at 7:00 a.m., meet our guides at 8:00 a.m., and drive to the river near Amherst College. We have two float rafts and are “wadered up,” including wading jackets, so even though it’s lightly raining, we are set. George and I have Dan Harrison for our guide. Harry and Reid are with a guide named Craig. We are working streamers and catching 12-inch browns and richly colored rainbows. Harry and Reid are using nymphs under indicators, and it looks like they are doing better than we are. The drifts are relatively short, due to the number of dams. It is interesting that as soon as a fish is caught, we turn and the guide works the raft back against the current to rework the spot again, often producing another strike. Lunch is streamside without great ceremony, but efficient given conditions and that we’re here to fish.

The next day, we put in at Fife Brook Dam and float the larger water south. The river is very scenic. Harry and I are fishing with Dan. George and Reid are together. We all agree that there is no shortage of fish and our guides know the water. We carefully release the fish, often while they’re still in the water.

The guides suggest we visit the famous rod builders, Thomas and Thomas5 in Greenfield. After lunch, we did just that. We knocked at the door unannounced, were greeted by John Carpenter (Communications Manager and woodworker) and were offered a tour. He explained the company was formed some fifty years ago and reorganized under new management about ten years ago. Today, they employ about twenty workers and ship their fly rods around the world. John acknowledged that the graphite rod is still the mainstay of the company, but they do make glass and bamboo rods.

Our last day on the Deerfield River was Wednesday. Unfortunately, Reid had to leave early to return to New York for work. The weather has cleared and we have a beautiful day ahead of us. Harry has Craig for a guide. George and I are casting 250-grainsinking lines, with the ubiquitous bead-headed, green wooly bugger. Ugly, but they work and we’re catching very healthy rainbows.

A question everyone has is how much did the fishing cost? We paid the guides $250 per angler per day, which included the tip and their fees.

We have a little extra time, given our flight is very early tomorrow, so we stop at Shelburne Falls, a town built around 1800 at another power dam. The town now relies on tourism and has converted a trolley bridge into a lavishly planted flower/garden, bridge/walkway. We visited several antique shops and, of course, found ice cream! Onto our Fairfield Inn and Suites destination in Windsor Locks, Connecticut, so we’ll be close to Bradley International Airport for our 6:00 a.m. flight on Thursday.

Harry, a special salute for putting all this together—from talking about the Deerfield River three years earlier, to arranging all the details and including us. It was a great trip! 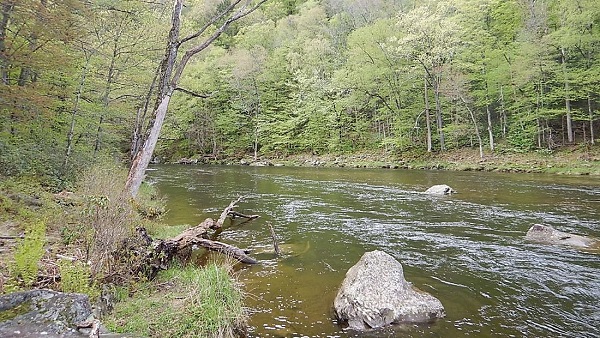 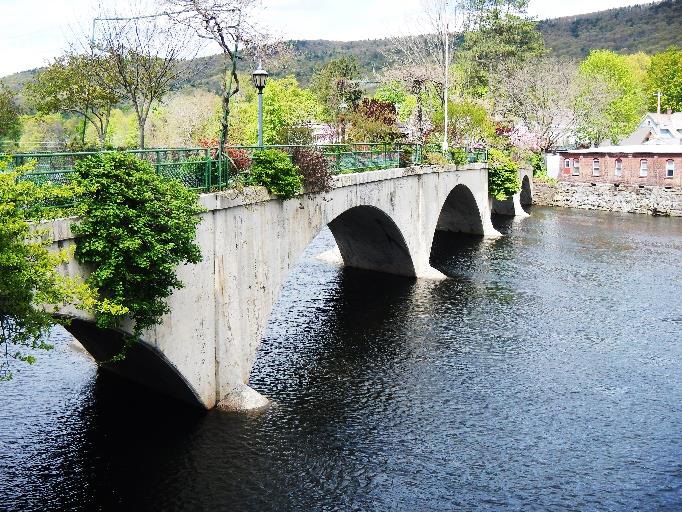 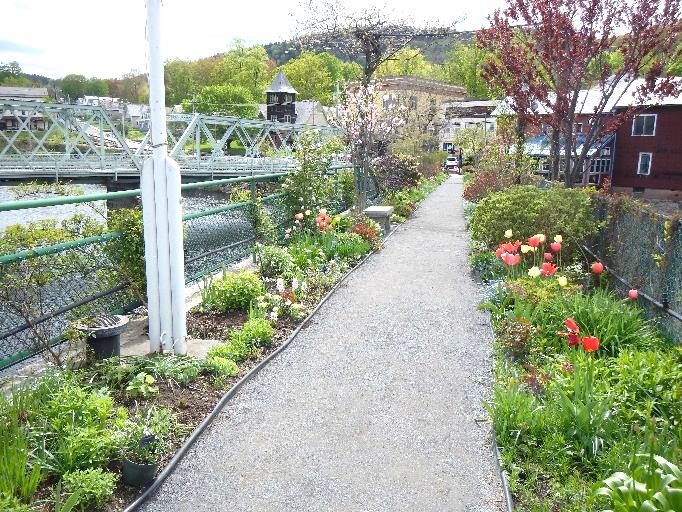 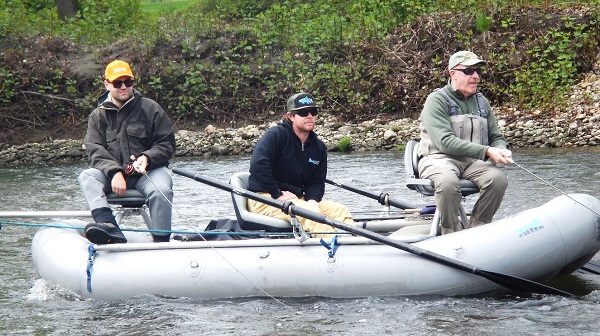 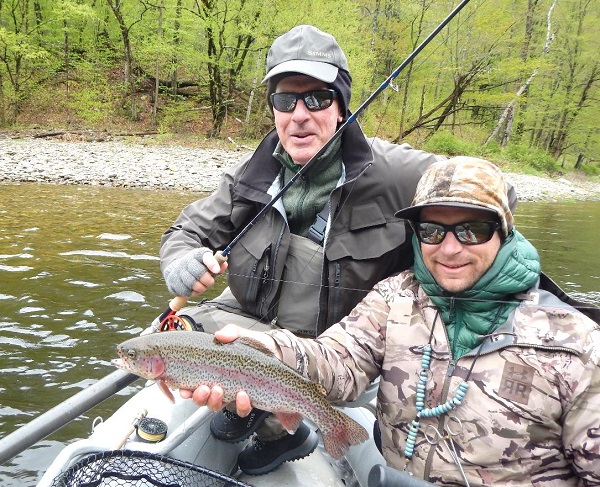 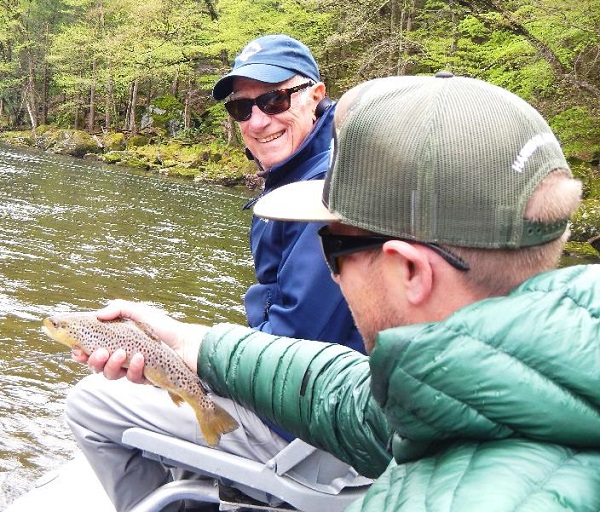 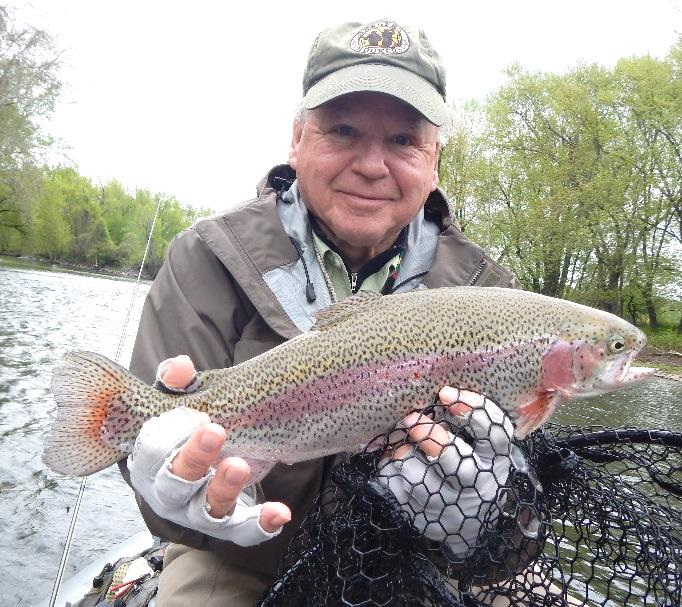