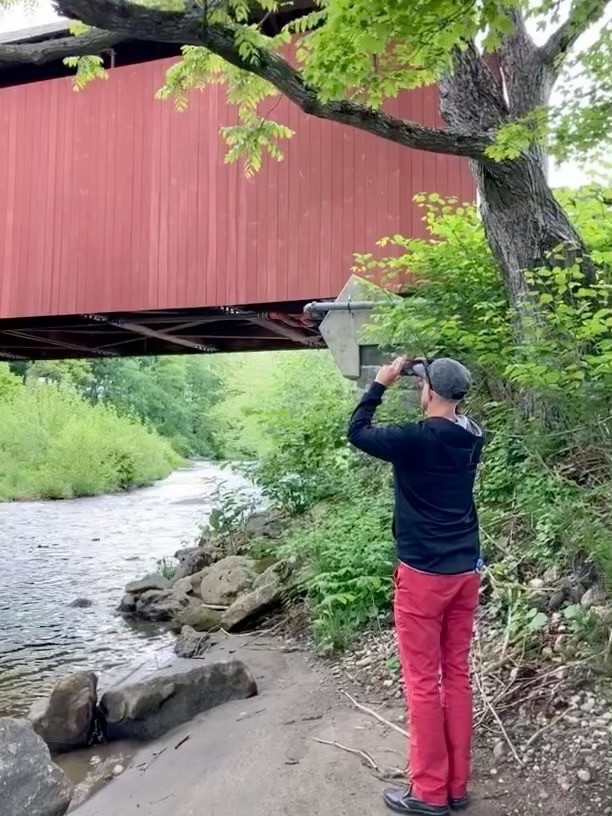 We set out prepared to document mostly creaky and condemned bridges. Not because we’re pessimists, but because of this discouraging introduction in our guidebook: “Unfortunately, four of the covered bridges in Massachusetts that are ‘endangered species’ are located in Franklin County,” (New England’s Covered Bridges: A Complete Guide, by Benjamin and June Evans, UPNE Press, 2004.) What we discovered instead was anything but unfortunate and nothing short of awe-inspiring. Clearly a lot has changed since 2004. Even more apparent: one of Franklin County’s unsung treasures is its covered bridges... or rather--SIX of its treasures.

As a long-time resident of Franklin County, I’d seen two and only crossed one of them. It took a visit from a hardcore Bridge Hunter from New Hampshire, my sister Deb, for me to remedy what I now realize was a HUGE omission. I’ll go so far as to say my very credentials as a Franklin County resident were invalid prior to “friending” these bridges, so if I overcompensate now for this shortcoming by gushing about these spectacular bridges, I hope you’ll forgive me. 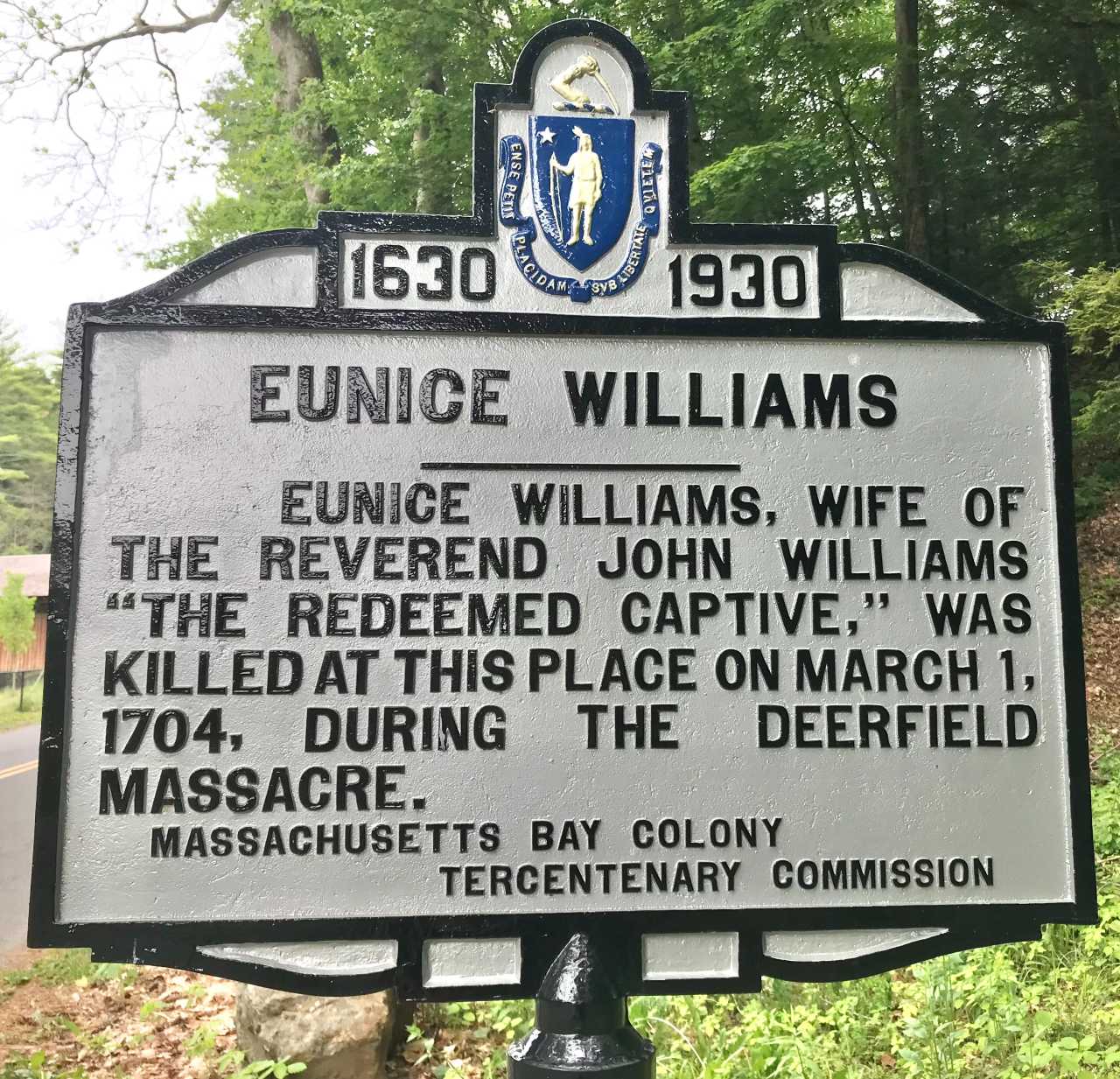 We began our pilgrimage at the covered bridge I know the best: the Green River Pumping Station/Eunice Williams bridge in Greenfield. Although the guidebook prepared us for the worst, I already knew that the bridge had been restored. And of course I knew the macabre lore that surrounds the bridge, making it a New England legend. Following the infamous 1704 raid on Deerfield by French soldiers and Native Americans, 112 captives were led on a forced march to Canada. One of these captives was Eunice Williams, who was killed by a Mohawk when she fell while crossing the river where the bridge stands. Two grim (and biased) plaques near the bridge commemorate this. What about the rumors that the bridge is haunted? Your intrepid investigator will get back to you on that a little closer to Halloween... 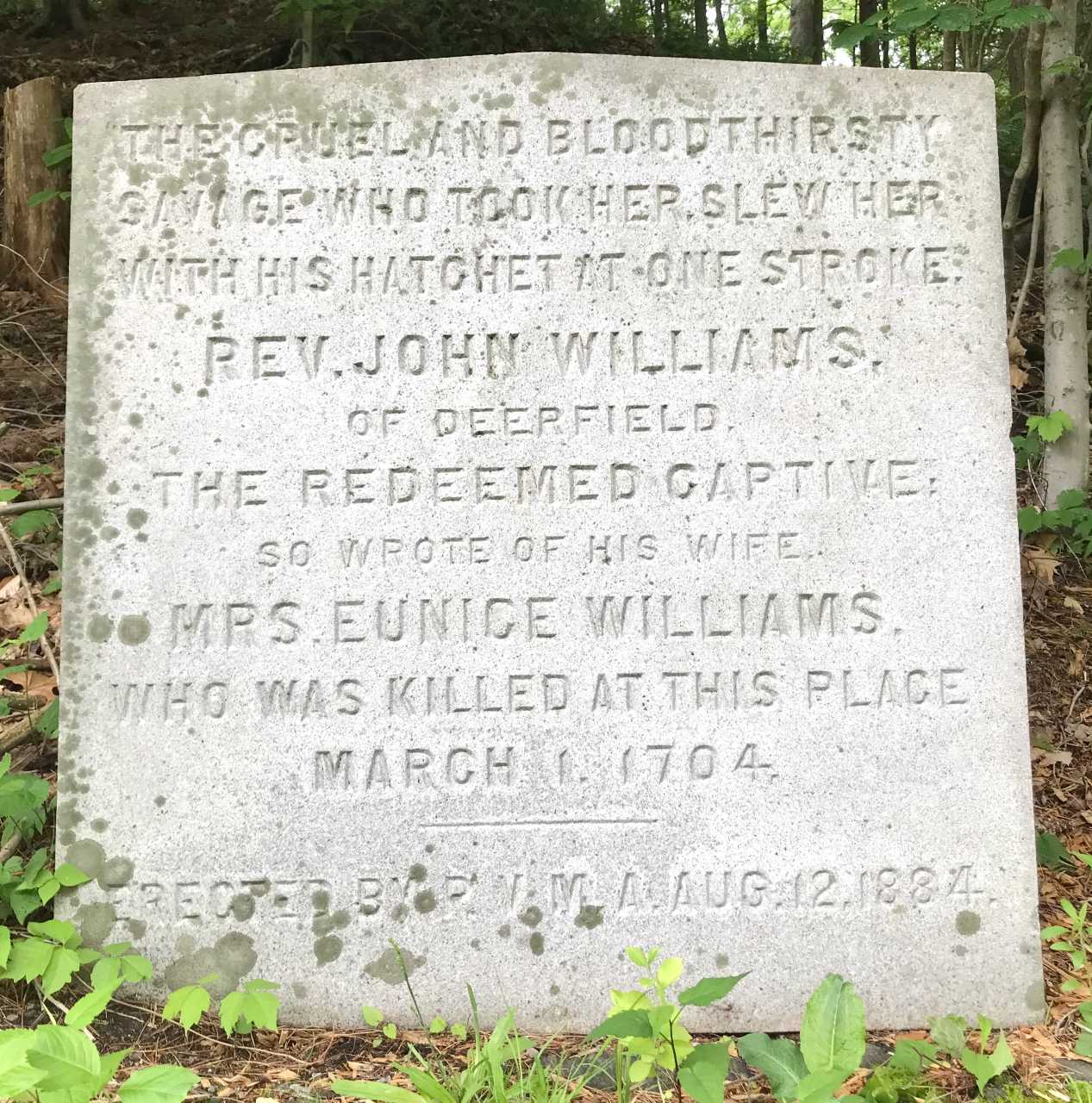 Originally built in 1870, Eunice’s 94-foot-long bridge over the Green River has had it rough in the last fifty years. It was rebuilt after an arson burned it 1972. Then in 2011, Hurricane Irene busted the retaining wall of the dam just upstream from the bridge, and the resulting flood knocked the bridge off its abutments and wiped out the access road. The bridge was repaired in 2014 and reopened to motorists for the first time in nearly fifteen years. 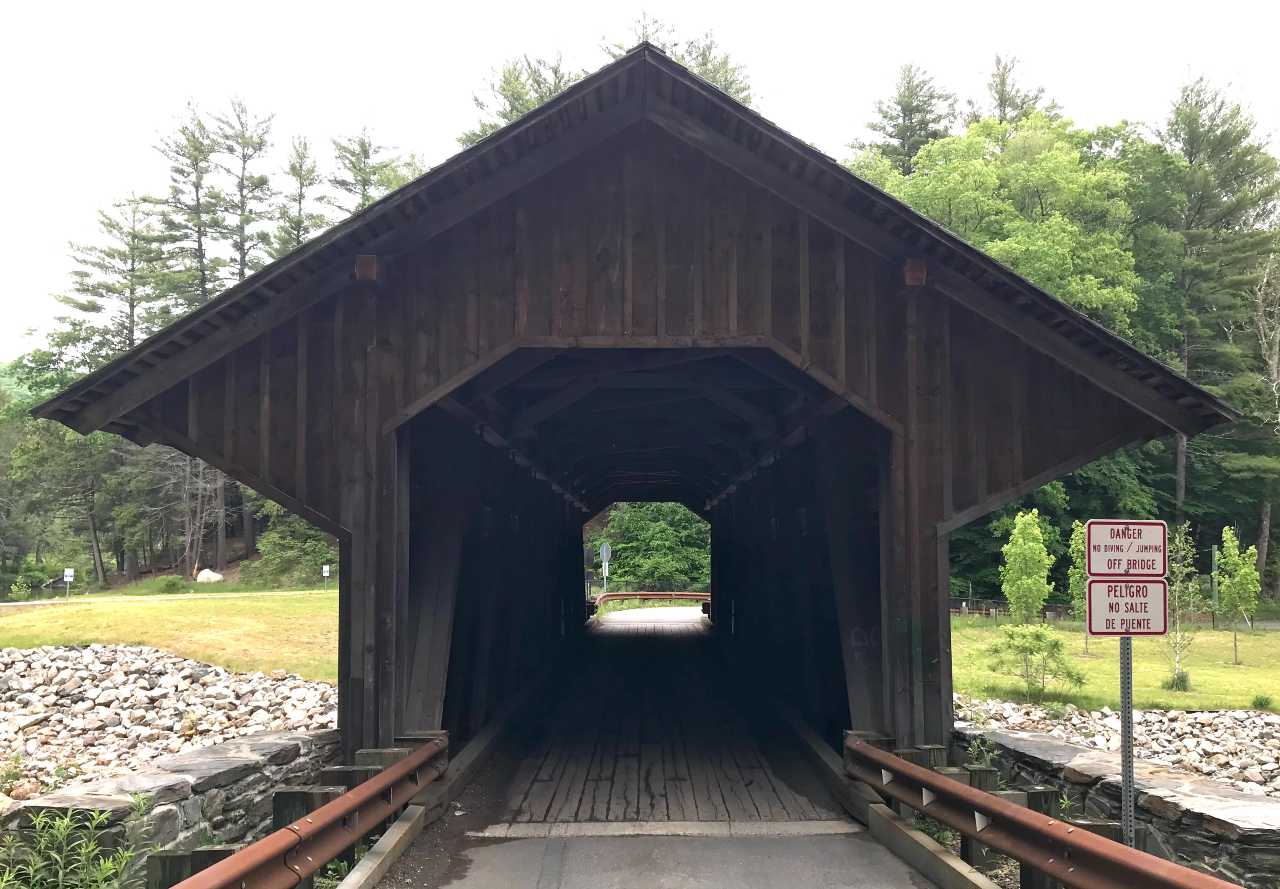 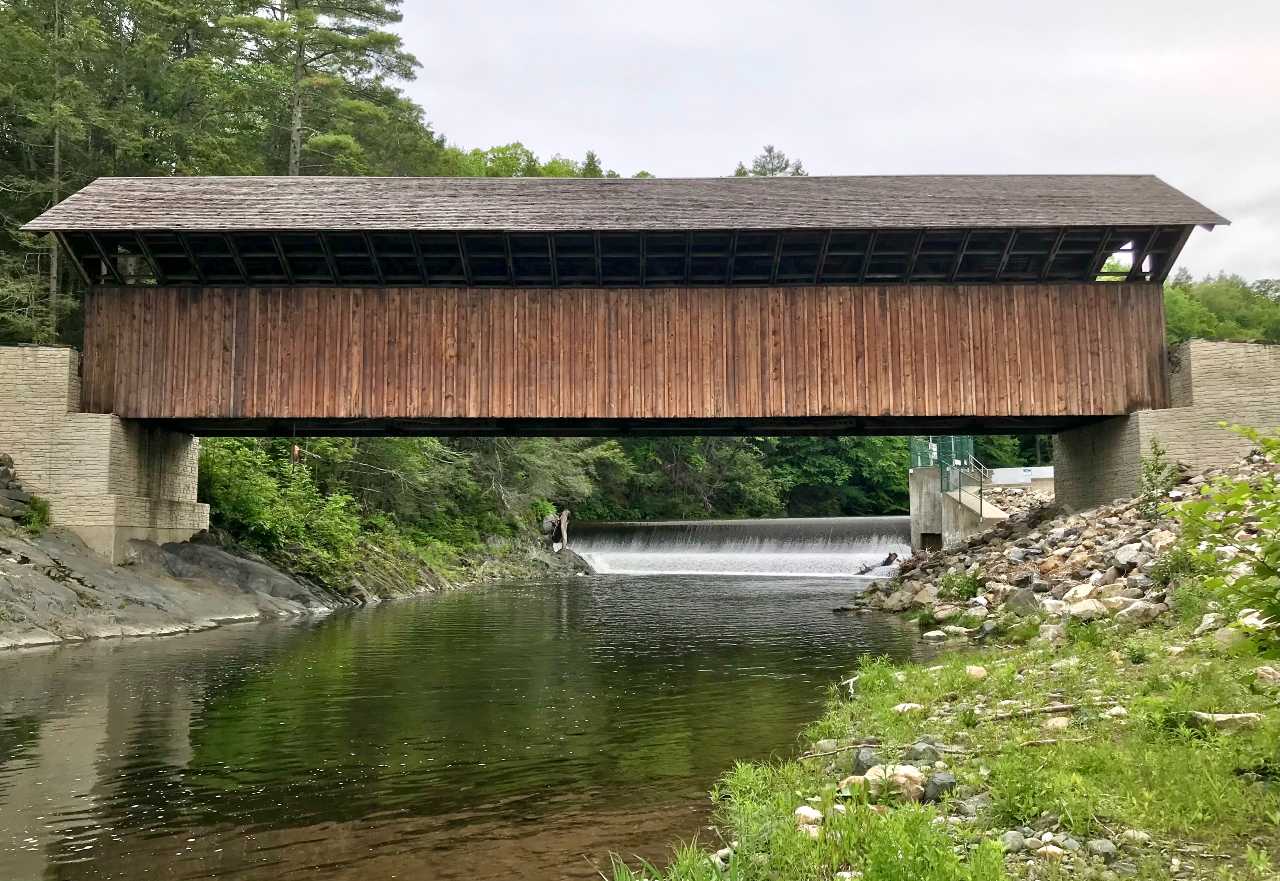 Our second stop was to the Arthur A. Smith bridge on Lyonsville Rd. in Colrain. Built in 1870 and named after a Civil War army captain who lived nearby, our guidebook described the bridge as looking like “it does not have a friend in the world,” accompanied by a photo of a decrepit bridge on rotten cribbing beside (rather than over) the North River. It certainly did look like it had been un-friended by all the cool kids. We were thrilled then, to discover instead a gorgeous bridge with fresh coats of red and white paint that was not only once more crossing the river, it had clearly made lots of friends who’d fully restored it in 2006 and proudly hung a plaque with their names on it inside the bridge. It had even been befriended by a luna moth which was relaxing at the center of the bridge’s curved Burr Arch Truss. Happy to see Artie’s bridge basking in the glow of popularity, we headed west to see how the covered bridges of the other Hilltowns were faring. 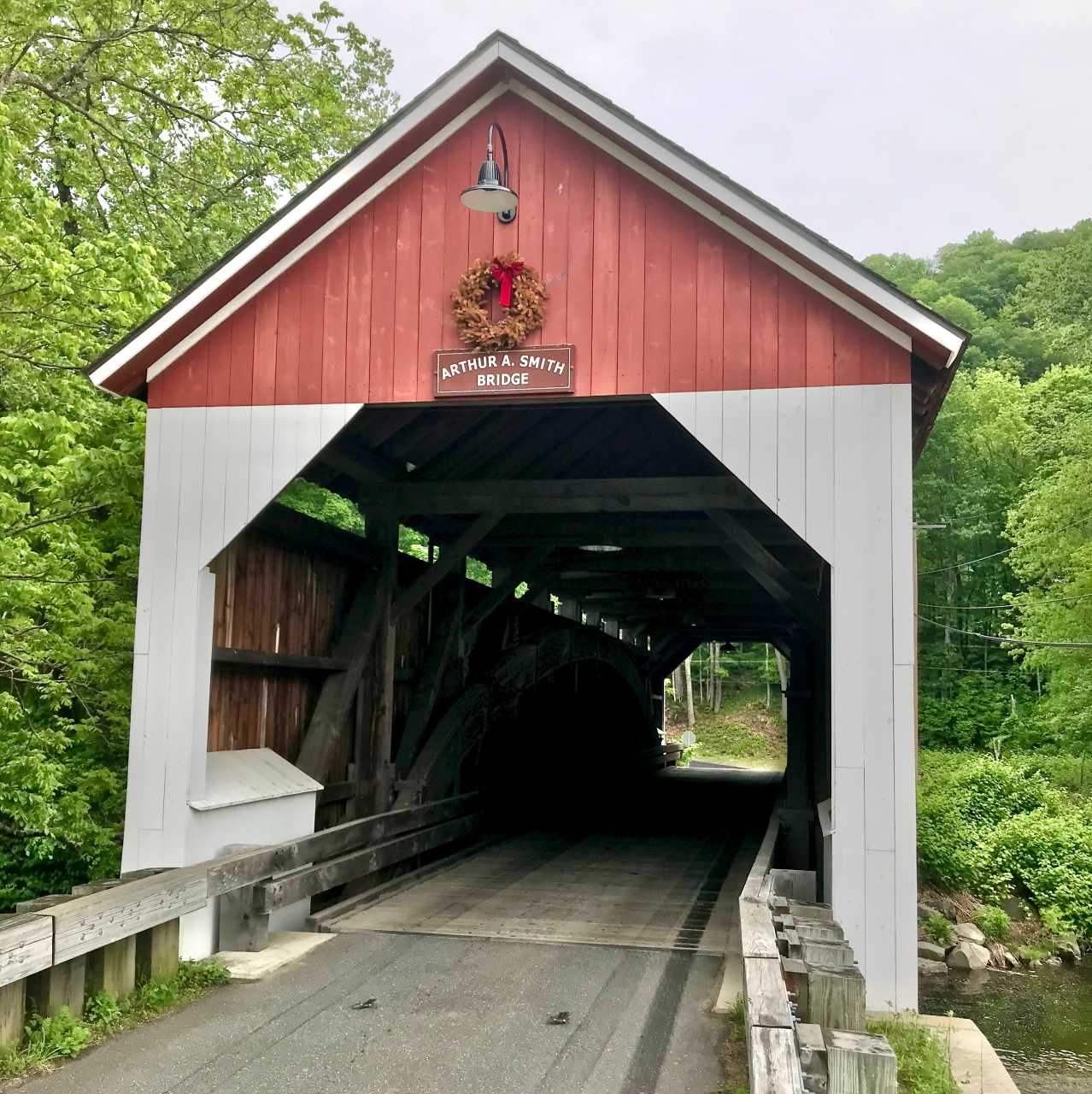 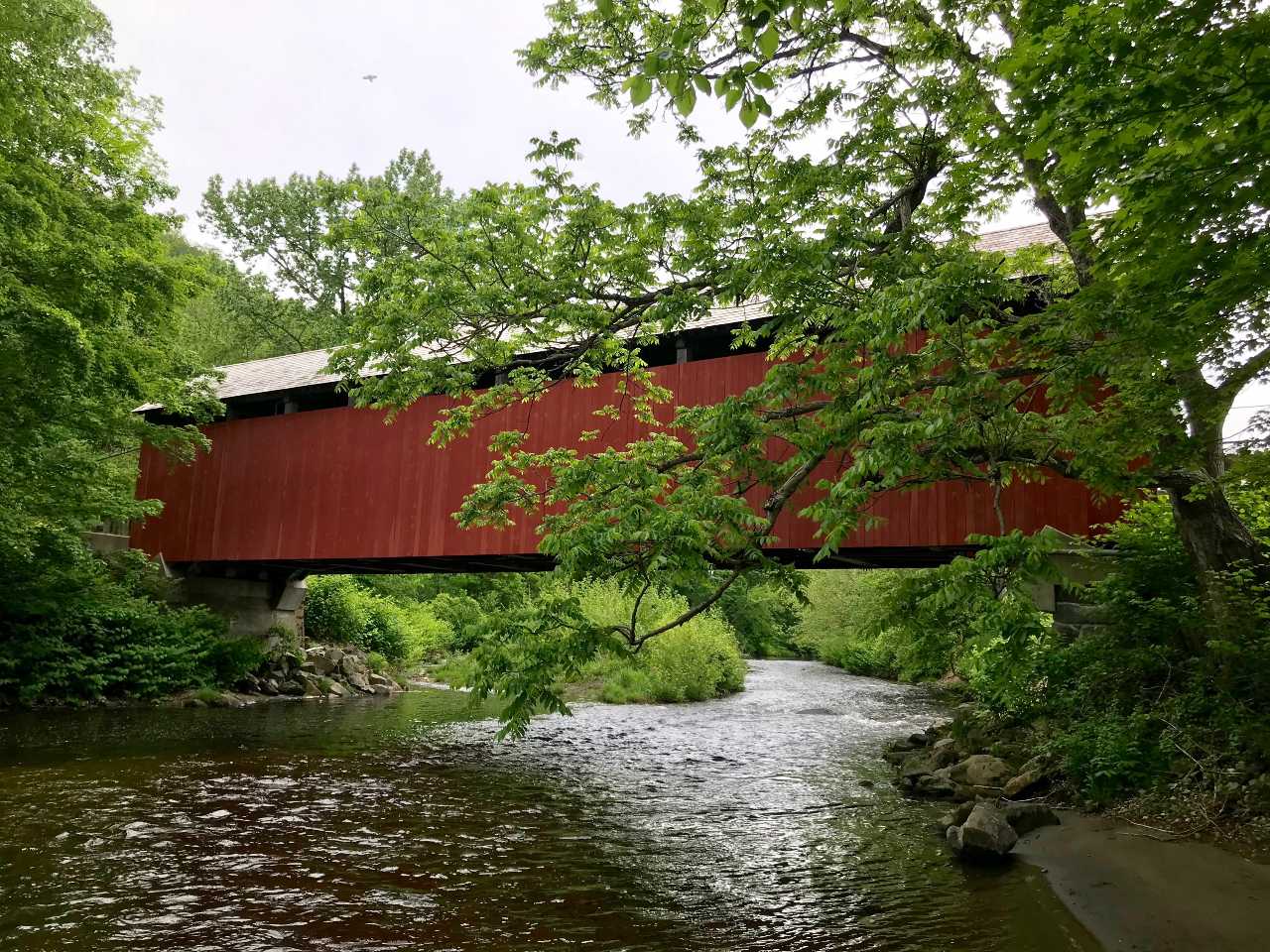 Arthur A. Smith Bridge side 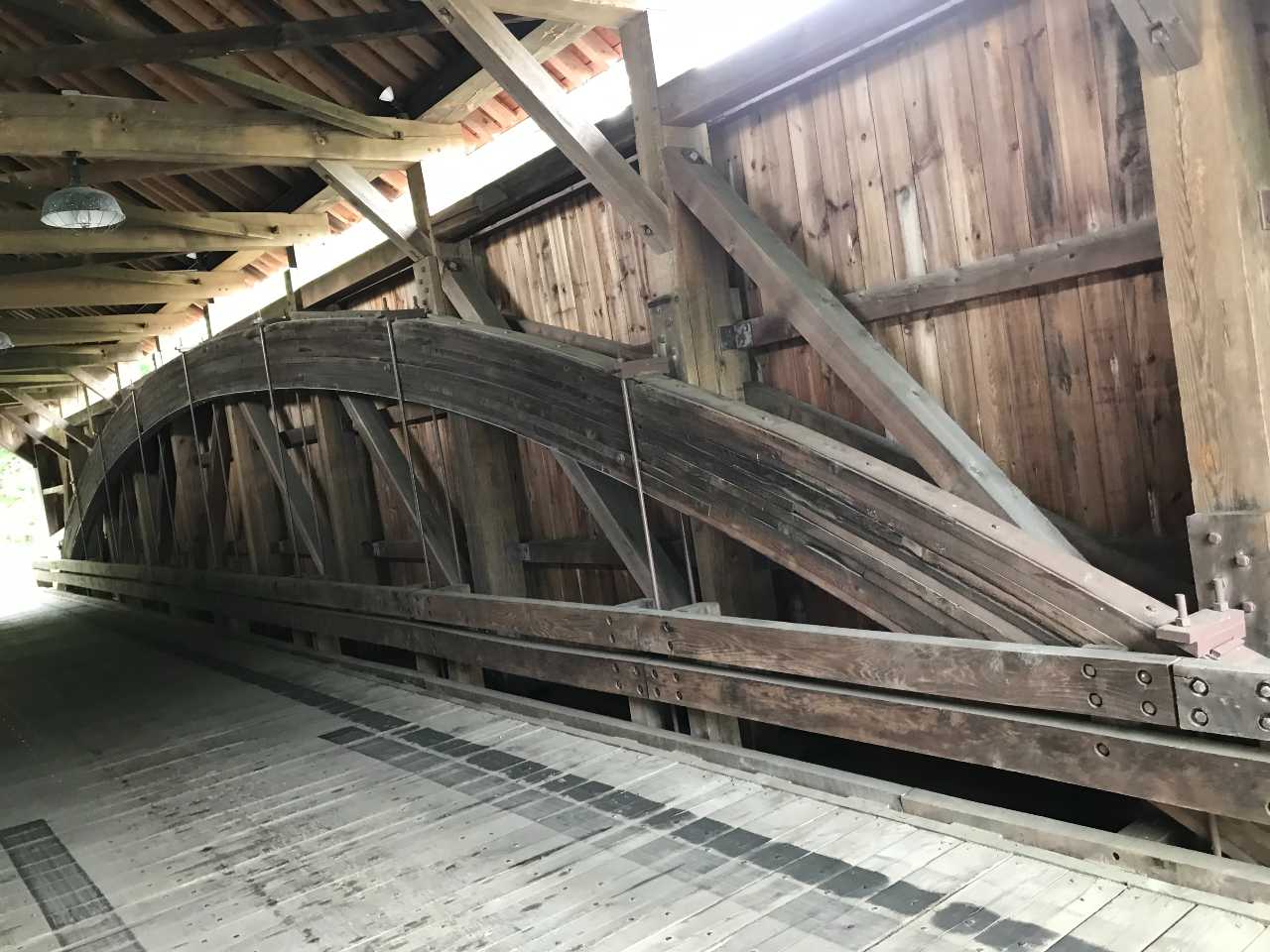 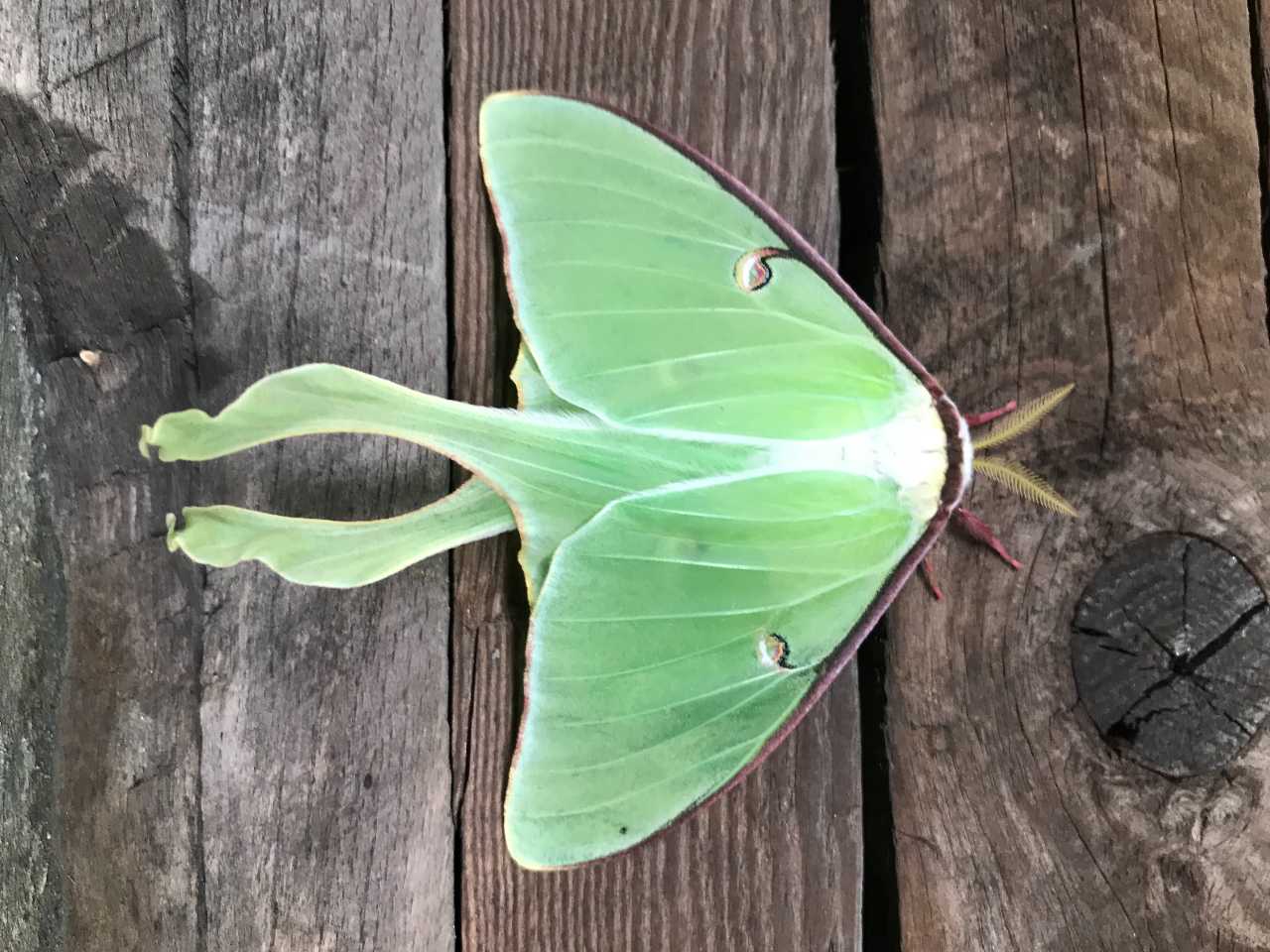 Yet again, our guidebook prepared us for doom and gloom as we searched for the Bissell Bridge on Route 8A in Charlemont. Despite knowing by now not to trust the guidebook, we were still totally unprepared for the transfixing beauty of both the bridge itself and the views from, around, and beneath it. There’s an elegant tiled viewing area above the bridge, windows inside the bridge, and a path that leads to an outcropping below the bridge where you’ll find absolutely stunning views of a waterfall and the Mill Brook winding off to infinity. Is it still possible to use the term “breath-taking” in the 21st Century without being cliché? Because the views of the Bissell Bridge and the surrounding landscape might make you wish you’d brought along surplus oxygen. This spectacular bridge was originally built in 1881 near the home of Henry Bissell (or Adam Bissell?) before being moved to its current location where it was restored and lengthened to 95 feet in 1951. In 2004 it was further restored and updated for the demands of 21st century road traffic. 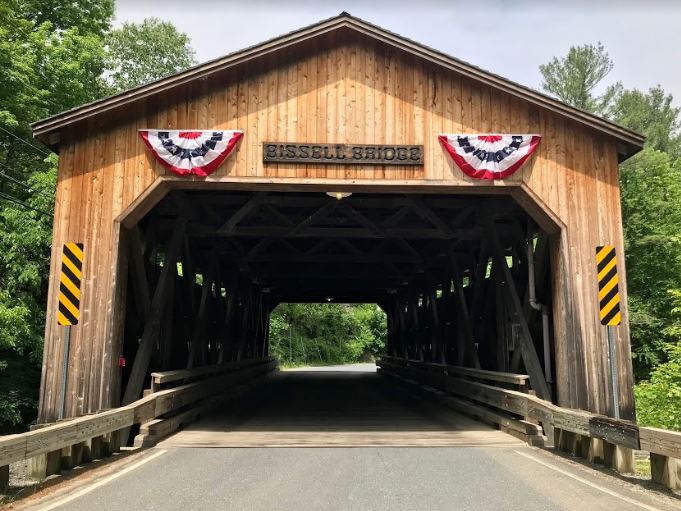 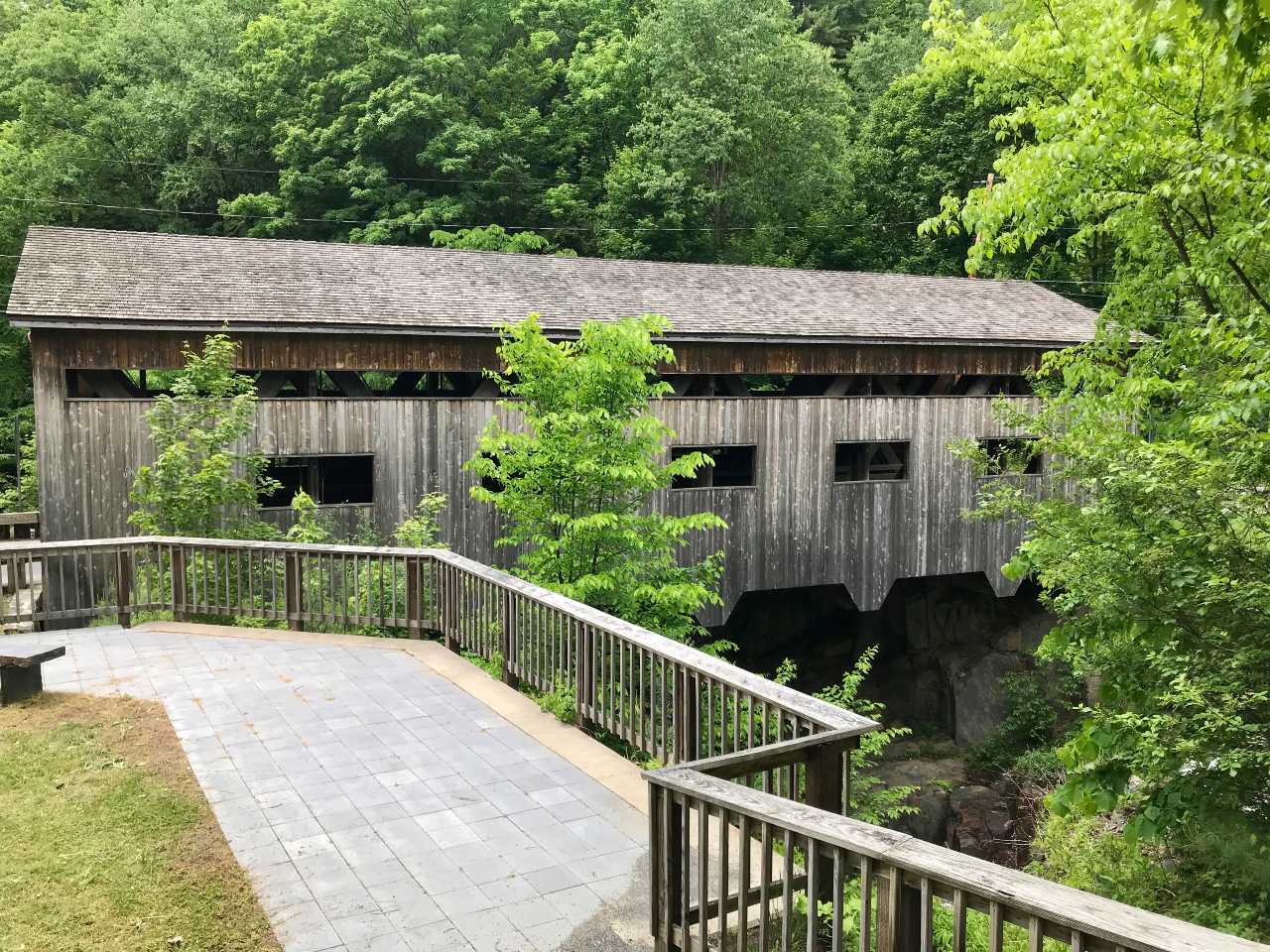 Yep, as we set out in search of the Burkeville Bridge in Conway on Route 116, our guidebook prepared us for another unsafe landmark closed off with a chain link fence. Happily, we found the historic bridge not only open to vehicles and bridge-gawkers, but in excellent condition. The only slightly disappointing thing about this bridge was simply that it was the trickiest one to view (and photograph) from the side because the embankments were so heavily wooded. However, this is more than made up for by the windows inside the bridge which offer wonderful views of the South River. Signs on the bridge refer to it as the Conway Covered Bridge; whatever name you call I by, at 106-feet-long and built in 1869, it’s both the longest and oldest covered bridge in Franklin County (by a year). 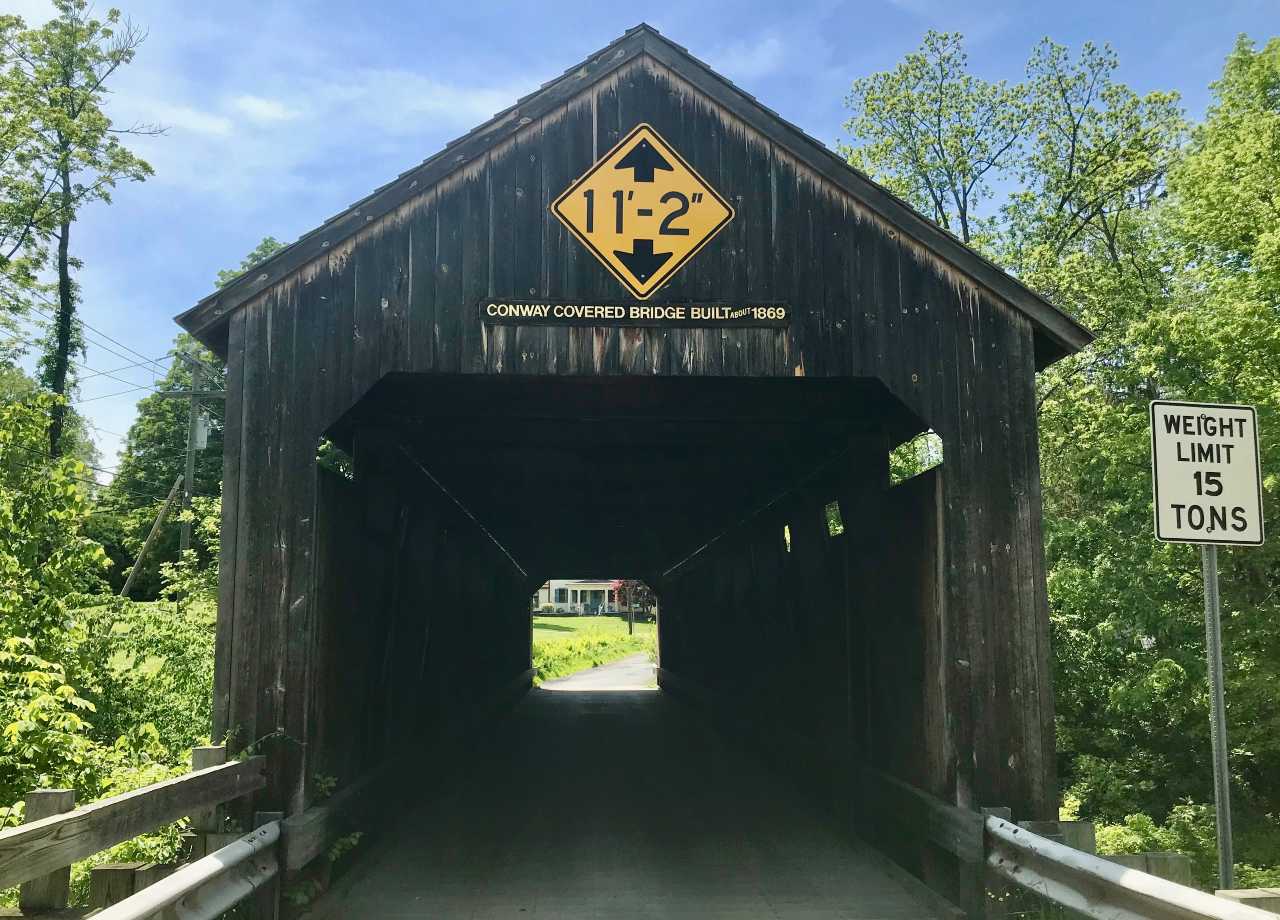 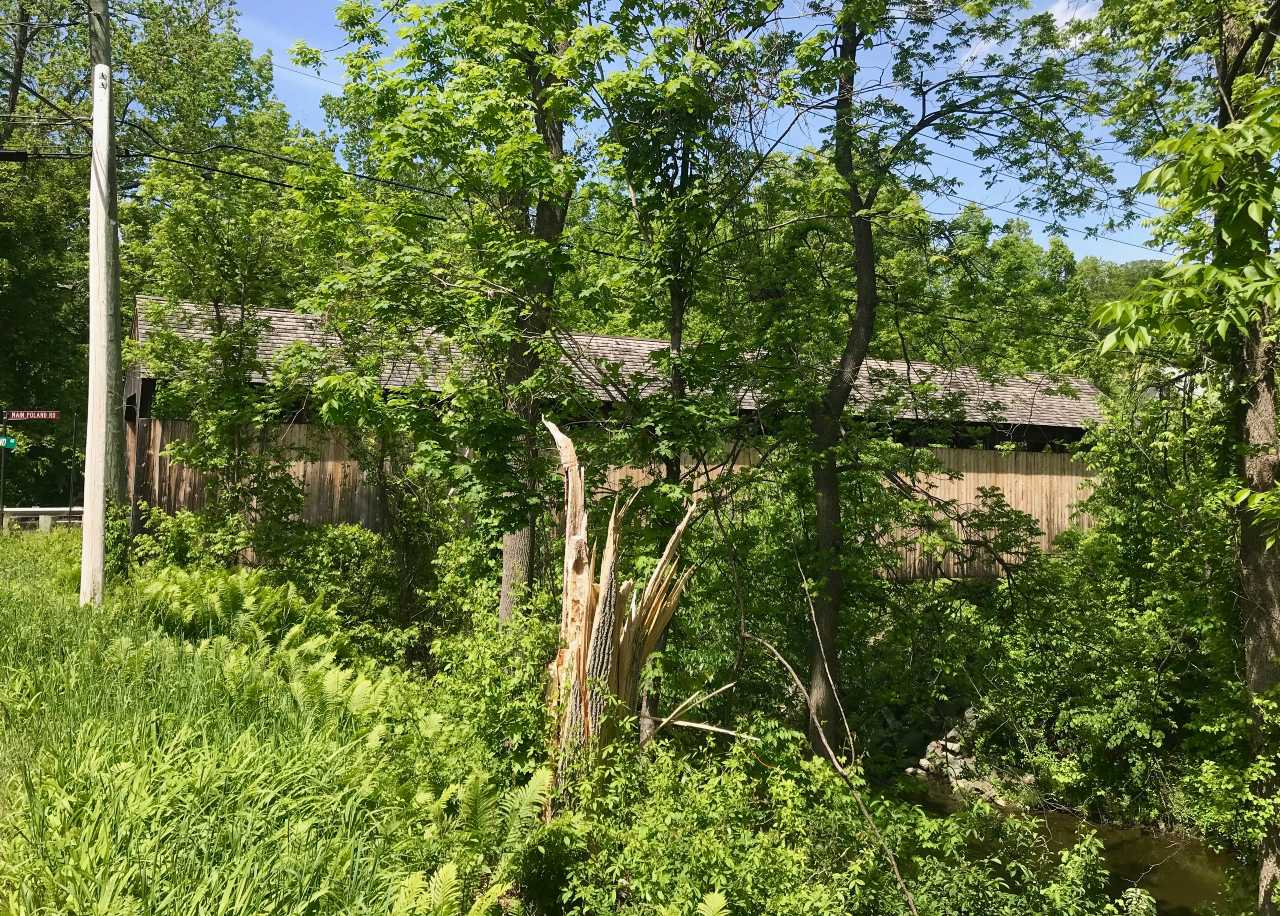 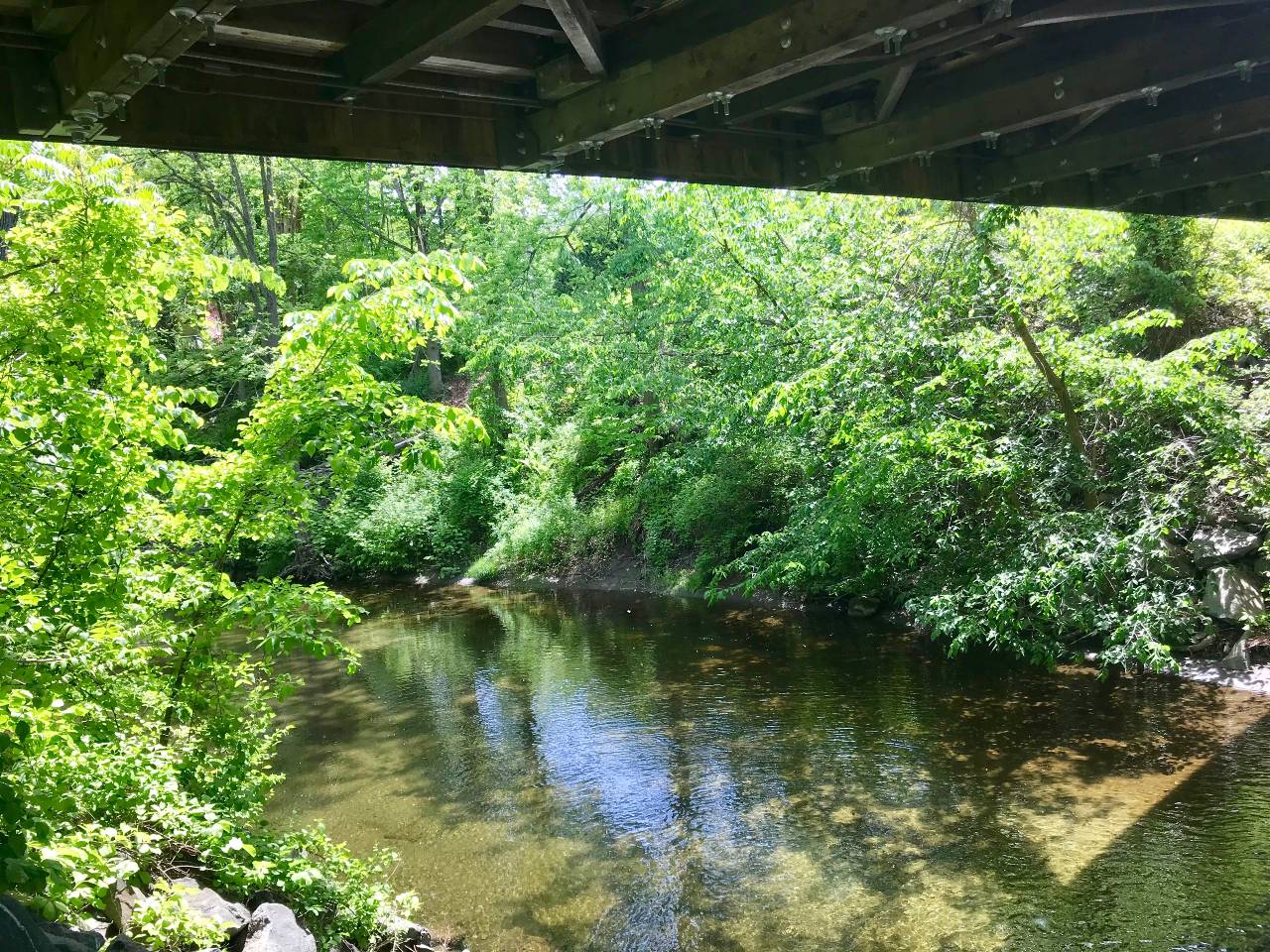 The final two covered bridges of the tour are the smallest, both footbridges on private land, but both well worth driving down windy Ashfield side-roads to see and admire. The Gray’s Sugarhouse bridge is on Barnes Road, past the Gray family farm and beside the old sugarhouse. This twenty-foot-long, six-foot-wide bridge was designed by private contractor and Scoutmaster Dwight Scott in 1994 and built with the assistance of his Boy Scout troop. When I reached out to Gray’s, they responded that “the bridge is not open to the public, but is readily visible from the roadside.” I was also told that “the farmhouse porch is open at all times for purchasing goods,” so if you visit the farm to buy produce, you may want to ask for permission to get closer to this short but very sweet bridge. 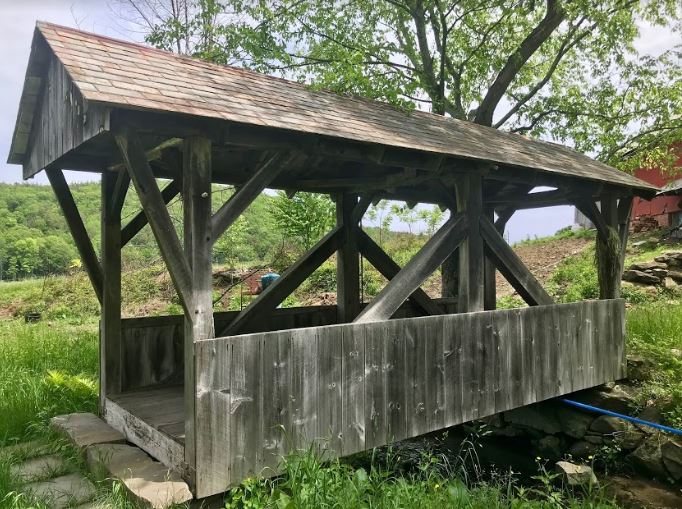 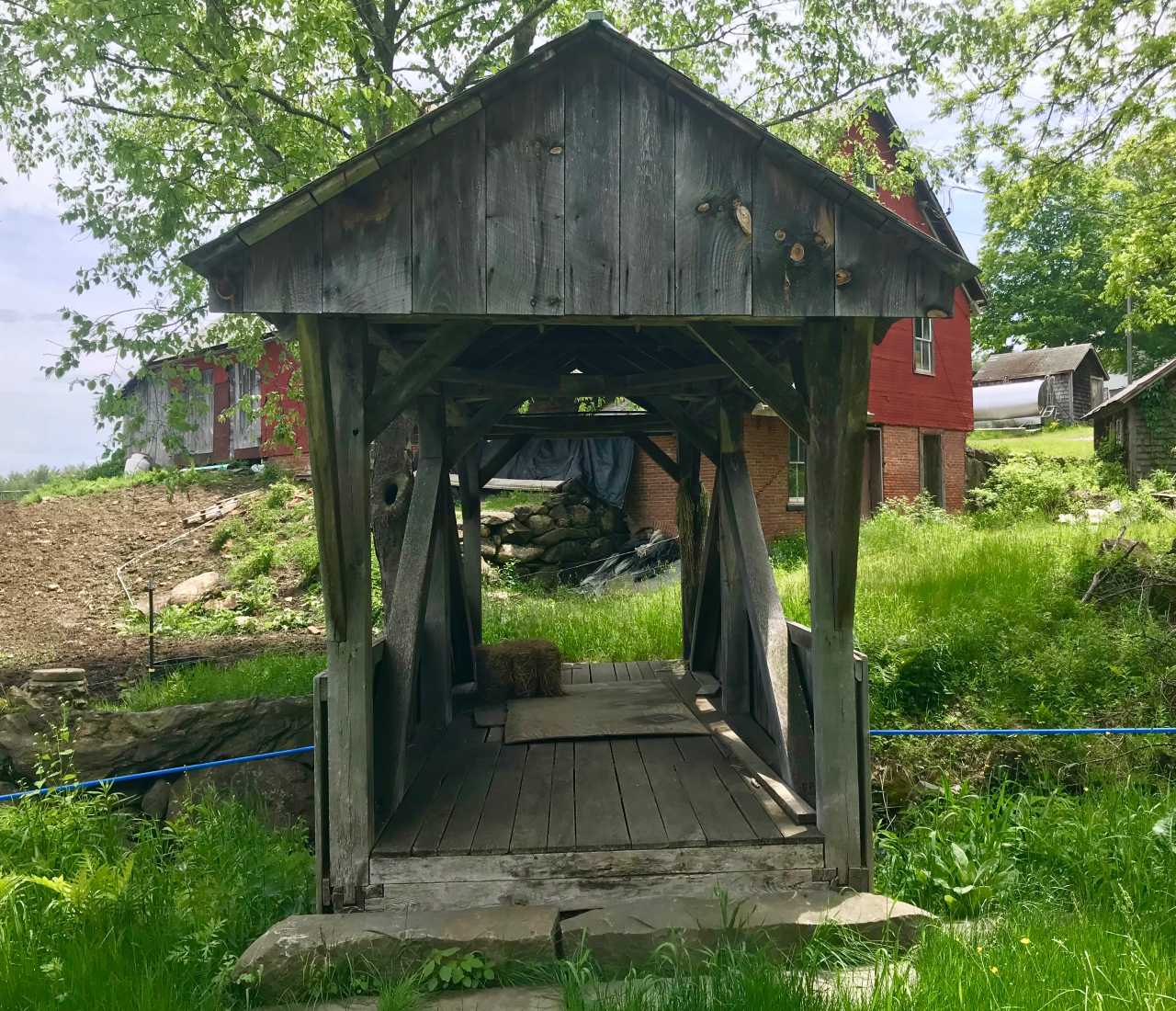 Last but far from least, you absolutely must visit the Creamery Bridge, designed and built by Dwight Scott--Patron Saint of Ashfield Covered Bridges--over Creamery Brook on Scott’s property on Creamery Road. Despite being on private land, the bridge is open to the public as long you treat this fantastic bridge with the respect it deserves. For starters, a weathered sign warns FIVE DOLLAR FINE FOR DRIVING FASTER THAN A WALK. Built in 1985, it’s not a historic bridge, but this “authentic queenpost truss structure” is so much more than just a fancy way to cross a brook. It’s also a place to buy the Scotts’ maple syrup and maple vinegar (which I did), visit an open-air mini-museum, and browse a knickknack and antique shop. Seriously, you have to visit this welcoming bridge to believe it. 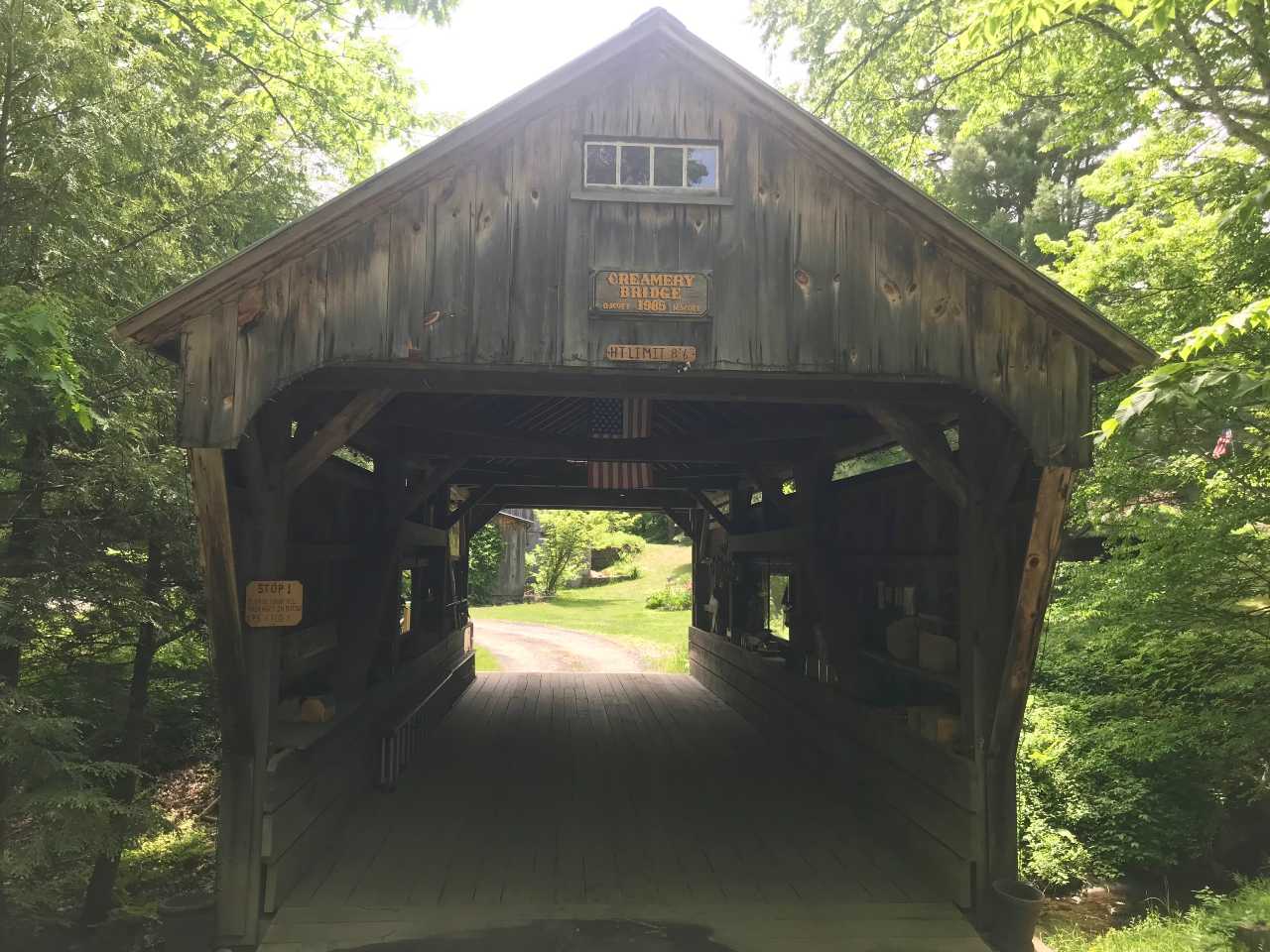 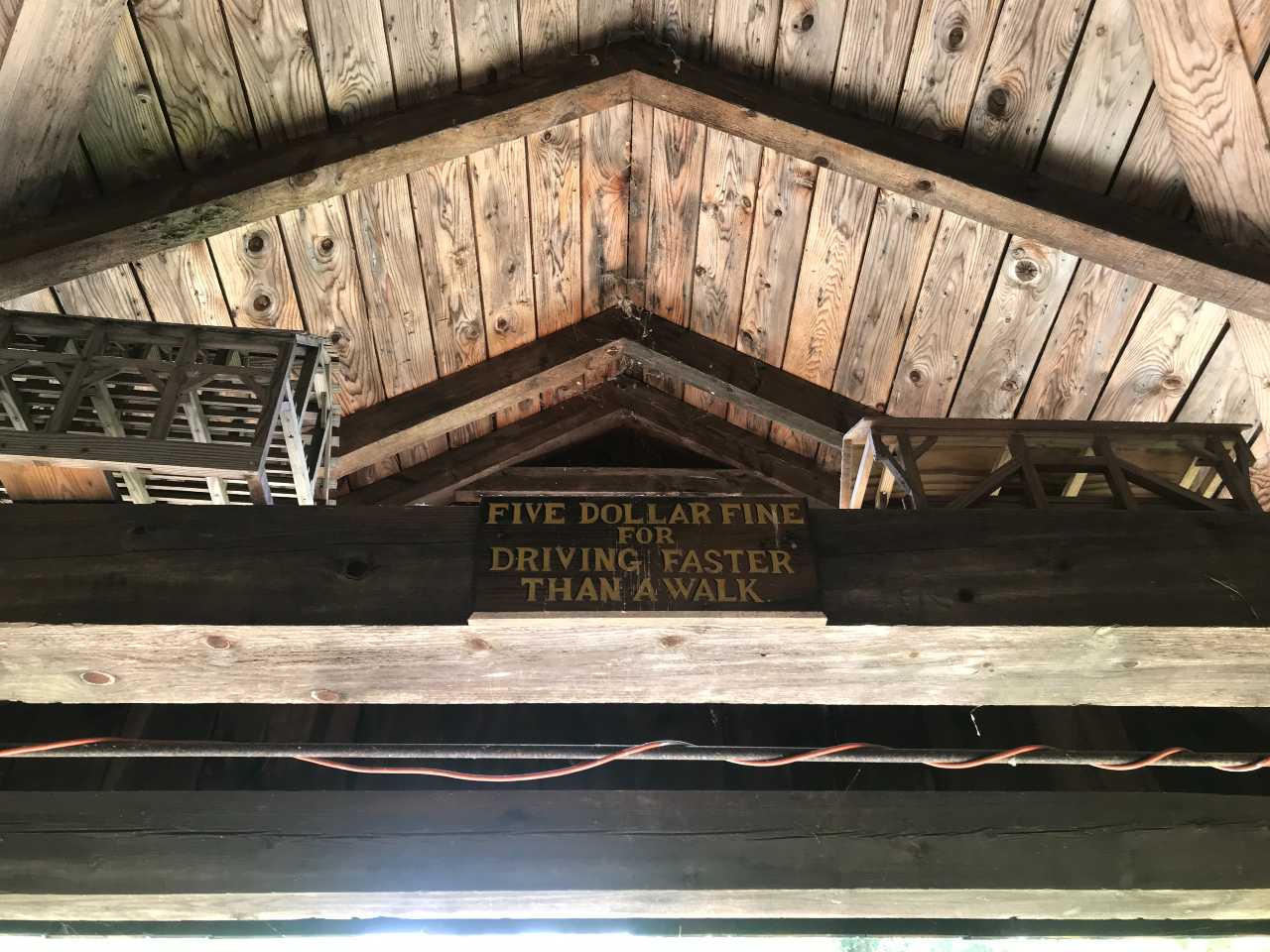 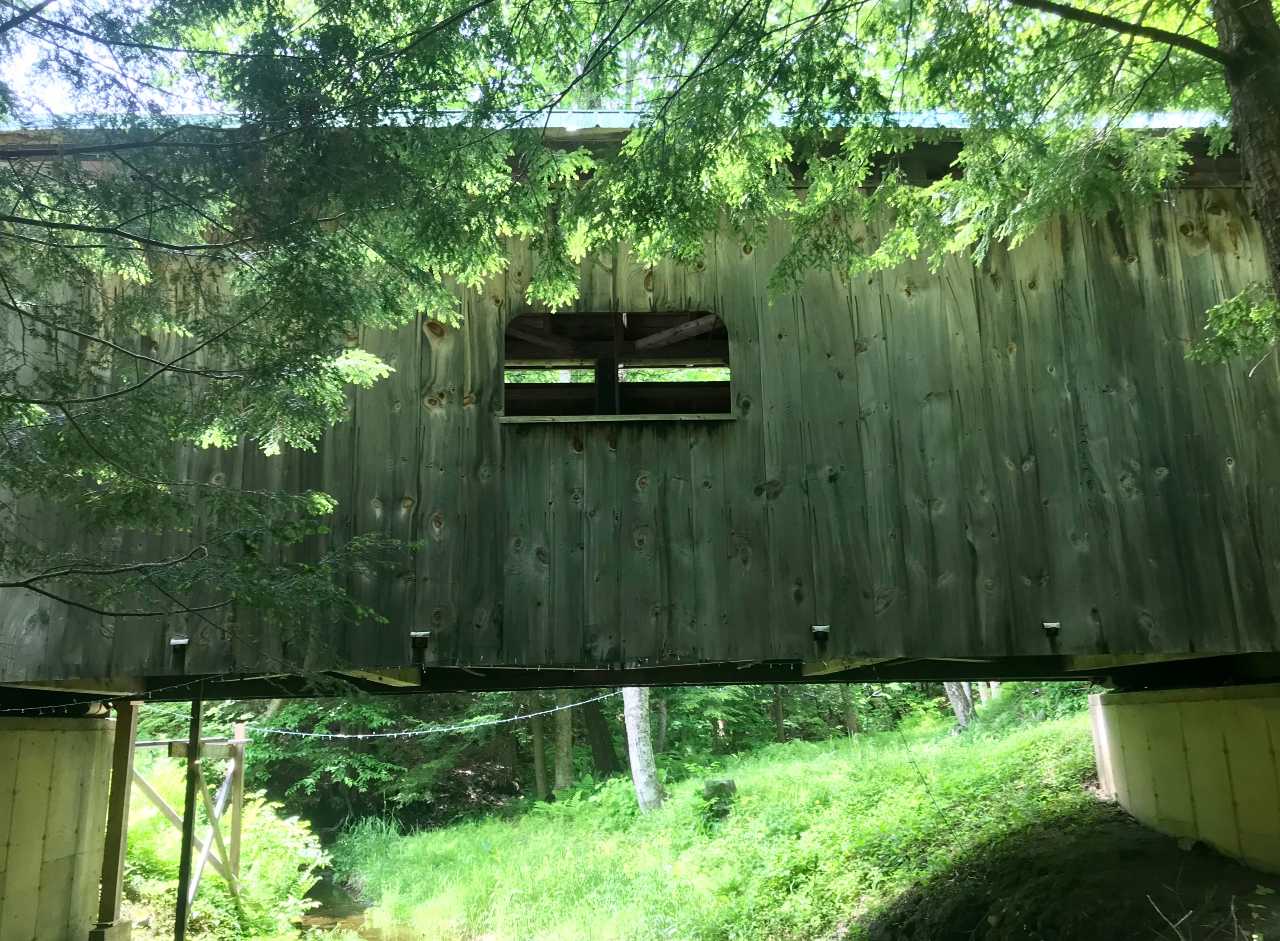 I could rhapsodize about each of these unique bridges at much greater length. Instead, I’ll just urge you to make a pilgrimage to meet and “friend” them yourself. I’ll even provide you with a bridge-themed playlist to cue up for your under-cover quest.

Go hug their historic trusses. Babble with their brooks. Shelter inside them during a downpour. And maybe you can add your name to the list of friends who help resurrect them if they should ever fall into disrepair again.