I took the leap, the plunge, the lunge, the splash, and did four of the fair-weather adrenalized activities at Berkshire East Mountain Resort. You might infer that I survived my bold exploits on Thunder Mountain from the fact that this piece of writing exists--and further, that I’ve written it to encourage you to pursue similar feats of daredevilry. And you would be right! 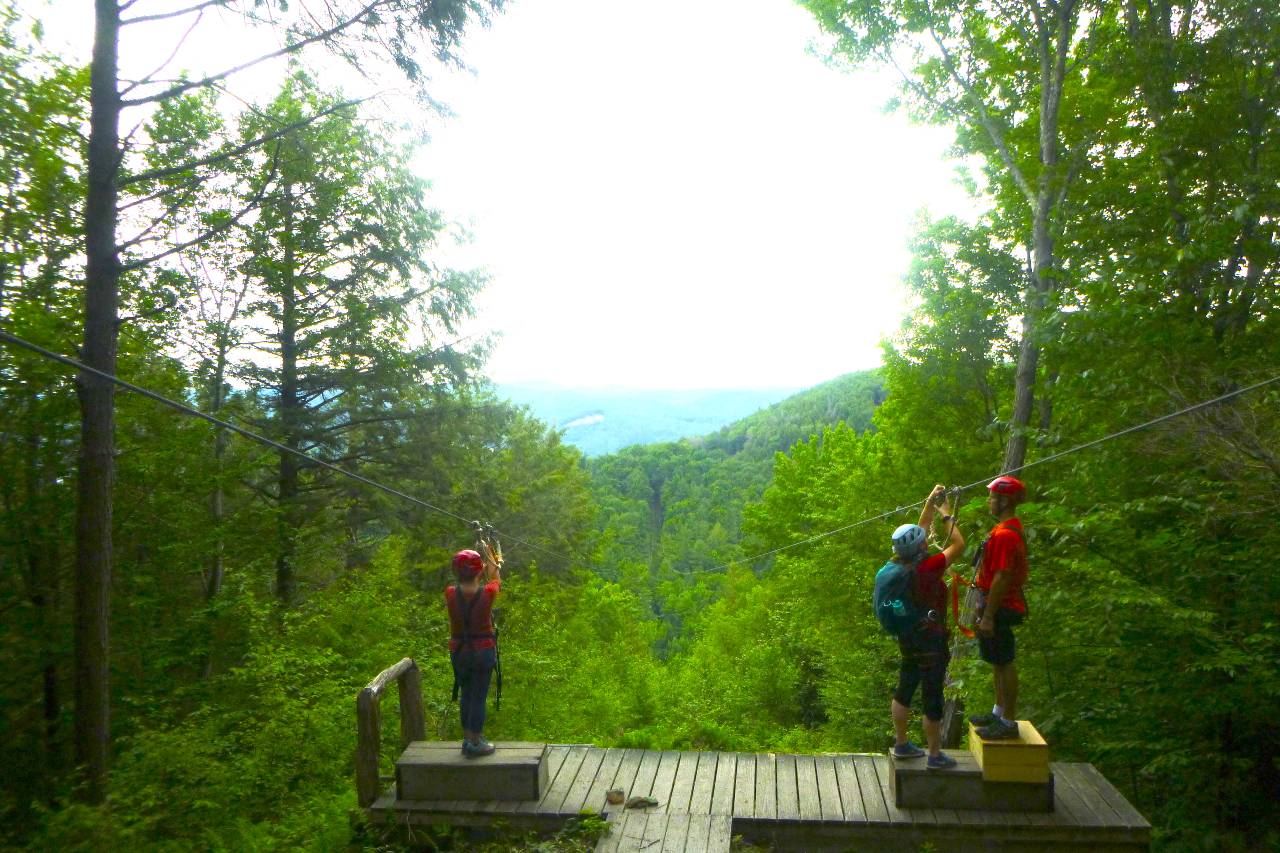 It’s hard to say when I first became obsessed with zip lining, but watching Luke and Leia swing across a Death Star abyss pursued by Storm Troopers in Star Wars, and a few years later, seeing James Bond and Holly Goodhead (?!) use a chain to slide down a cable over Rio de Janeiro while pursued by Jaws (supervillain with bionic braces) in Moonraker likely had a lot to do with it.  I’m happy to report that the zip lining at Berkshire East is just as exciting as Hollywood has led us to believe--and a whole lot safer, too. Best of all, zip lining without murderous bad guys in pursuit allows you to enjoy the view so much more.

And the panoramic views of the Deerfield River Valley at Berkshire East are absolutely incredible. Just as each of the six “zips” on the Valley Jump Tour is longer than the one before it, likewise, the views get progressively prettier and more expansive. The entire tour takes about two and a half hours, with a nice, short hike through the woods worked in between zips. There’s something very satisfying about this pacing. As your confidence and comfort with zipping across the sky increases, so does the length of your ride and the vistas you’re treated to. The second to last zip is 2,300 feet long and takes you across the town line from Charlemont to Hawley... 150 feet below you. 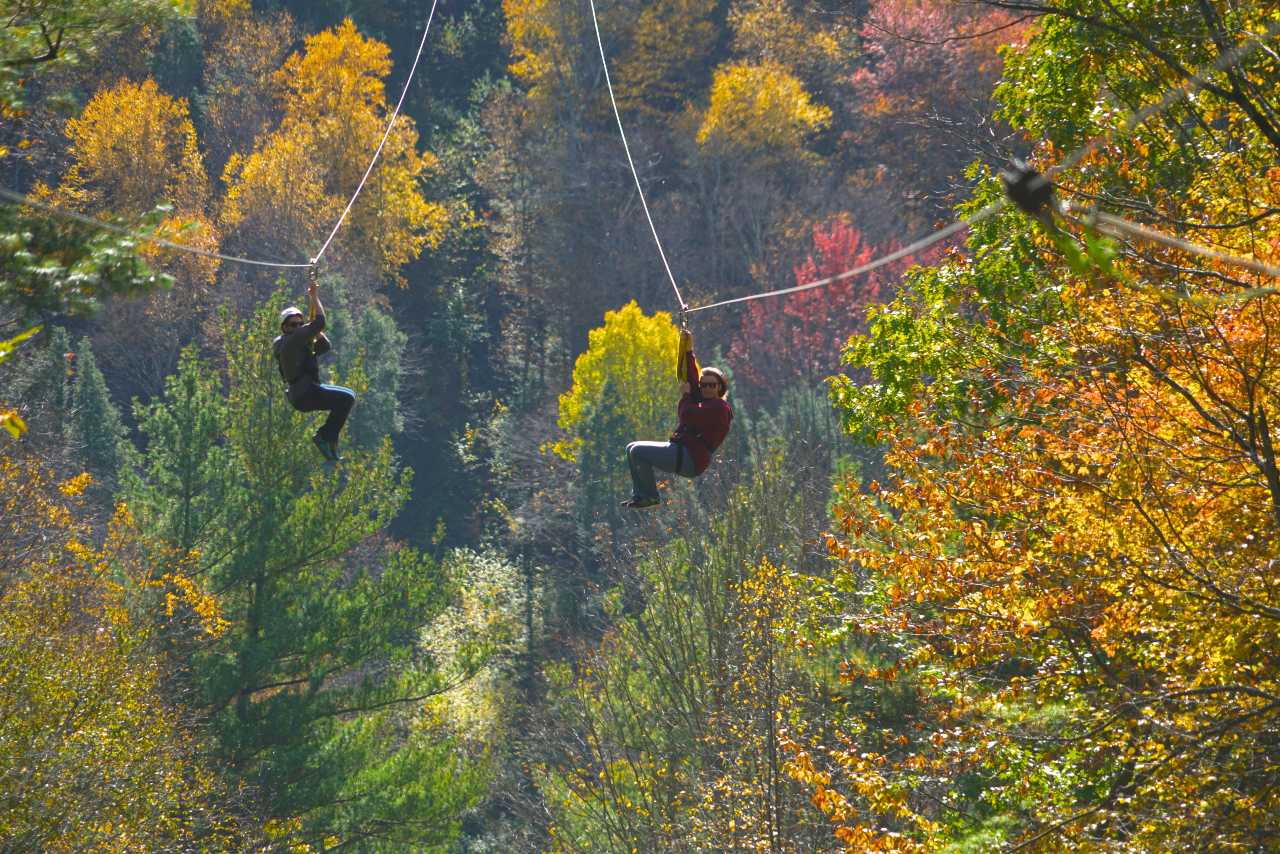 The final zip is 2,600 feet long--about half a mile--and finds you nearly 200 feet up in the stratosphere with the valley spread out below you. If you enjoy mixing some friendly competition in with your leisure, the last two zips also have two dual/parallel lines, allowing you to race someone else. If you’re intent on winning (or are being pursued by supervillains), become a bullet by tucking your legs up and condensing your mass. If you’re more about peace, love, taking in the view, and lingering longer out in thin air, try doing my favorite new aerial dance: the starfish, by spreading out your limbs.

You don’t need to be a Jedi or a secret service agent to zip line: anyone can do it. Your friendly, patient guides will teach you everything you need to know in a few minutes. After that, you can simply enjoy the exhilarating rush and take in the view... or let the view take you in as you zoom across the sky. 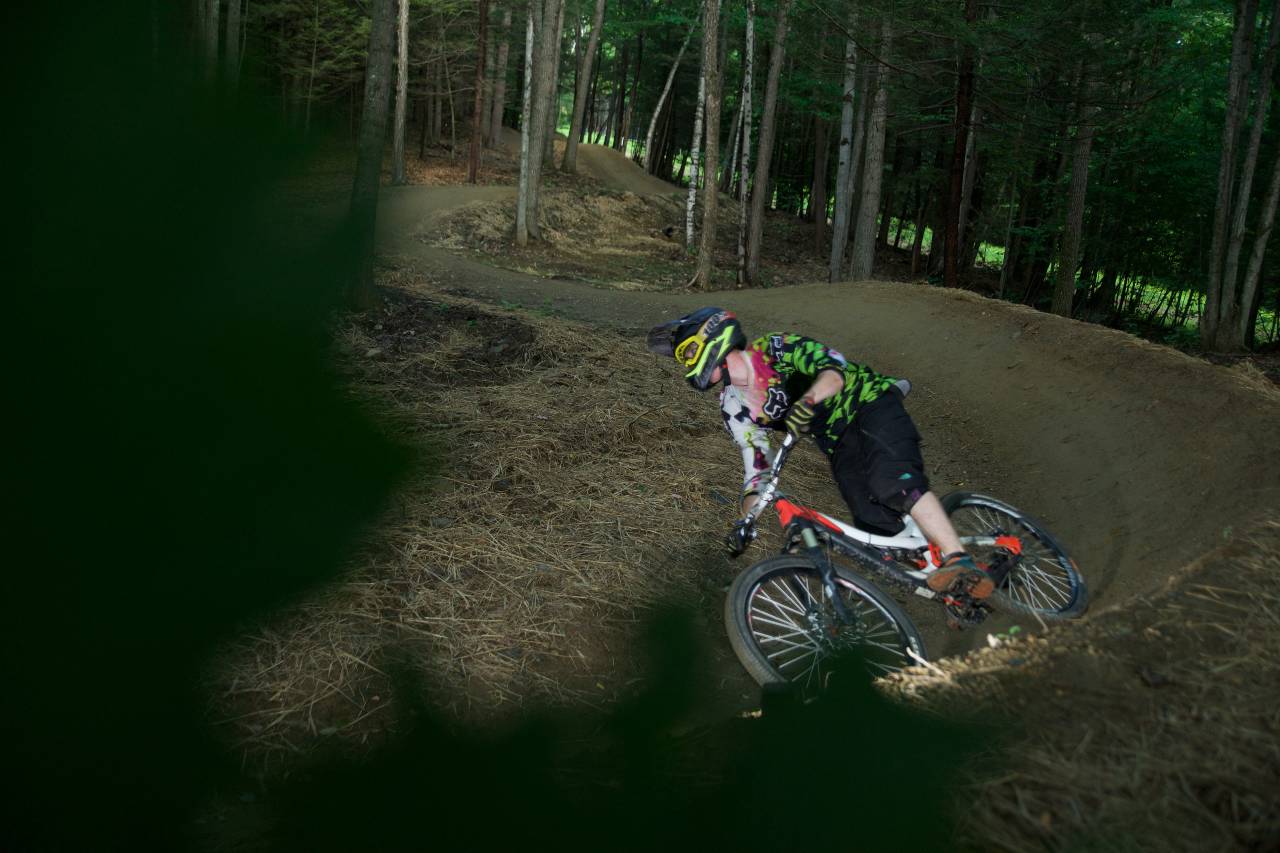 I’ve been riding bikes so long, I can’t remember a time before I knew how. Gravity downhill mountain biking, however, is unlike any other kind of biking I’ve done before. For starters, there’s the bike itself. My main ride these days is my mom’s old skinny-tired Schwinn “Sportabout” 10-speed circa mid-70s. My rental bike at Berkshire East, a Scott “Gambler,” with its thick frame and fat tires, felt a bit like a tank by comparison. Then there was the seat, which was so low, I was sure my legs would be dragging all the way downhill. Finally, there was the visored helmet and padded suit I donned, which were surprisingly light, but looked like a suit of black plate-mail. As my steed and I took the ski lift up, I wondered if I’d be given a lance at the top of the mountain so I could joust with other riders on the way down.

Once I began my first ride down the mountain, the logic of the low seat quickly became apparent. There is next to no pedaling involved in downhill mountain biking, even if you ride the brakes as much as I did. The trails are so steep, you are essentially coasting--or flying--down the mountain. As such, it’s important to keep your center of gravity low and not have the seat get in your way. This is especially true if you wipe out, which I did a few times. Thankfully for this beginner, there are trails for every skill level: Beginner, Intermediate, Advanced, Expert, and Pro. With a goal of writing a thorough piece, I initially thought I would at least attempt the first three levels. For the purpose of actually surviving to write the words you’re reading, I quickly realized that I should stick to the first two levels. 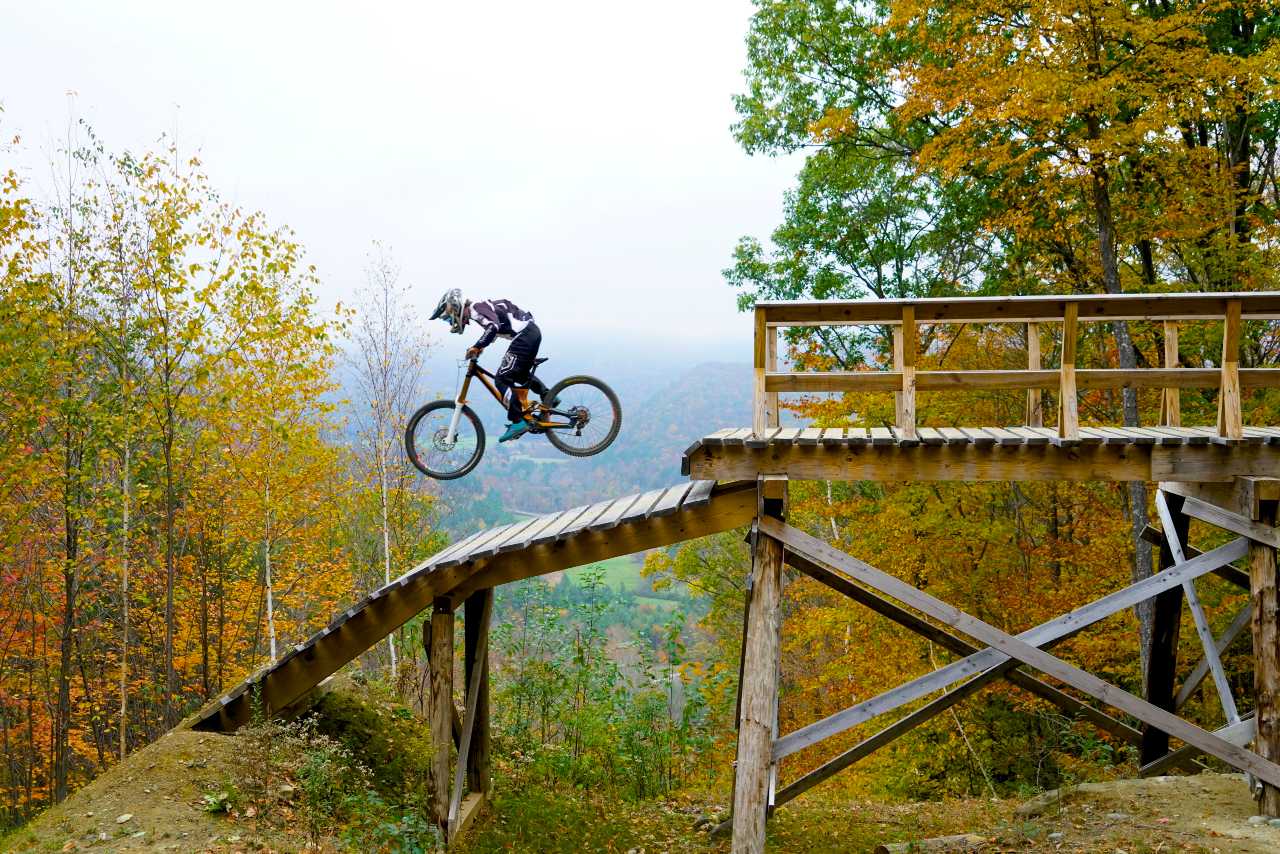 The good news is, the Beginner trails are incredibly fun and “flowy,” as the guy in the bike rental shop described them. Even better: the Beginner trails offer the longest rides since they take a wider, more gradual route down the mountain. The more advanced the trail, the more straight, steep, and fast your trip down the mountain is... and the sooner you find yourself riding the lift back to the top. Know your skill level, and then decide how much of an adrenaline rush you’re looking for. If you’re a skilled rider, and you need breakneck speeds and big jumps to get your biking high, Thunder Mountain has you covered. As for me, I’ll be happily flowing down the Sugar Line. And still, I was riding my brakes much of the way. Even the beginner trails can get extremely fast and intense if you take them full throttle.

The Intermediate trails are not only faster, windier, and have more jumps, they also find you re-orienting yourself to the Earth, temporarily defying gravity. That is: many of the trails are carved into banked berms, allowing you to bike sideways (I can only assume the Pro trails are primarily upside down). If you like getting air, I recommend The Gronk, which is riddled with sweet jumps. Other intermediate trails I enjoyed were Harold’s Blend and Sleeping Jake’s, though I cannot imagine how Jake managed to sleep through that gnarly ride. 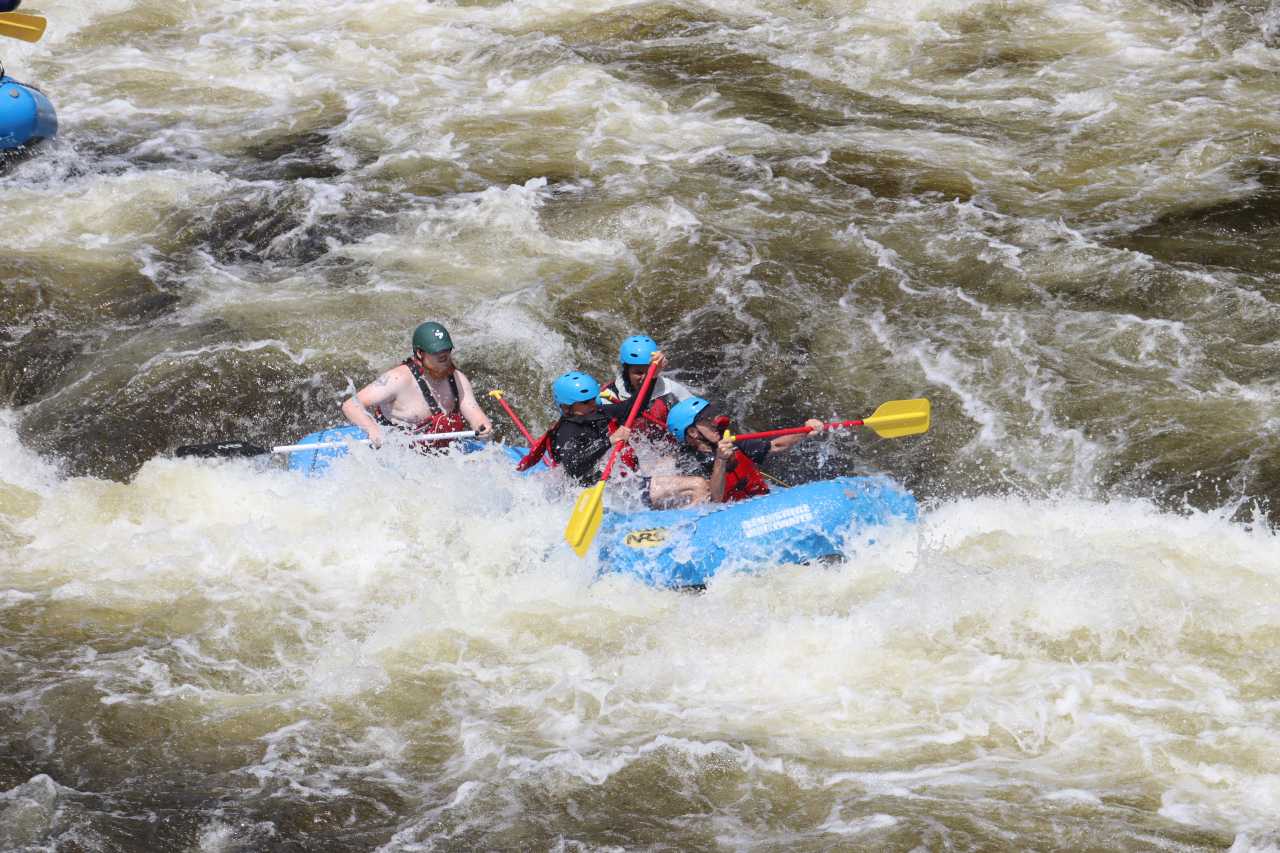 Certainly no one slept through the rafting trip I took. Despite unusually high water due to lots of recent rain, there were still plenty of Class II and III rapids to keep the ride exciting... and to keep everyone on board drenched. The Fife Brook Trip is about five miles long and can take from two to three hours depending on how fast the river is running. After safety instructions, rafters were issued helmets, life jackets, and paddles before boarding a bus which drove us to the put-in. Each raft has a professional guide at the rear steering and several non-professional paddlers (you!) helping propel the raft at key points in the trip. If you want the most splash for your buck, sit in the front, which I did.

If you want to get even wetter, there are a few mellow spots along the way where you can jump in and swim, or play “rodeo” by standing on the front of the raft while your co-paddlers try and shake you off. I was able to ride the raft-bronco for nearly a minute before I was bucked into the river. When not paddling, rodeo-riding, or holding on tight as the rapids rock you, there’s plenty of time to enjoy the scenery, which is exceptionally beautiful. There’s very little development on the riverbanks, and there are long stretches where all you’ll see are pristine woods and water.

But when you hit rapids, your view is mostly white water. Will your raft make it through the narrow “Lemon-Squeezer?” Will your raft get a high score bouncing through “Pinball 1” and “Pinball 2?”All the fancifully named rapids are appetizers for the main course: the Zoar Gap, where the white water onslaught will have you white-knuckled gripping your oar’s t-grip and digging your feet deep into the folds of the raft. I found the ride through the Gap to be the most fun, the biggest adrenaline rush, I’d experienced--so far--in my Berkshire East adventures. 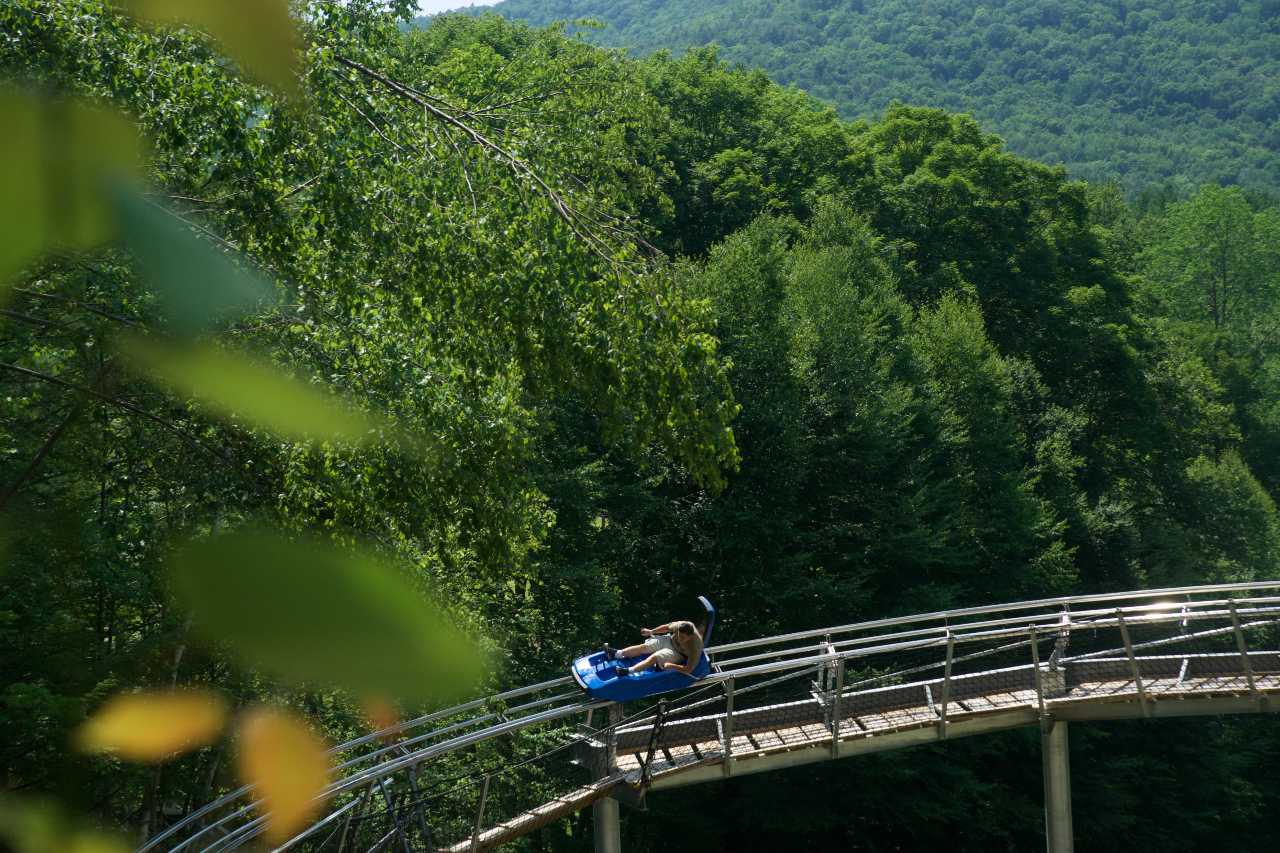 The final stop on my adrenaline-rush crash course was the Thunderbolt Mountain Coaster. You board your cart at the foot of the mountain and are conveyed on a track to the top of the mountain. This is your chance to look around and take in the scenery... because you will not have much opportunity to do sightseeing on the way down.

Unlike a traditional roller coaster, once you’ve reached the top and begin your descent, you get to control your speed. Push the brake levers forward to go faster, pull them back to brake. Seems pretty intuitive, right? Yet somehow I found myself repeatedly doing the opposite: pushing the lever all the way forward and going full throttle when I had intended to slow down. Did I shriek or call out to higher powers at such moments? It’s entirely possible. There may have also been occasional bursts of unhinged, maniacal laughter issuing from my mouth.

As your cart weaves, winds, and wooshes down the mountain, so too do your insides. If you like the rush of roller coasters, you will love the mountain coaster. You have the option to ride a cart solo or as a passenger riding in front of the one controlling the speed of your descent. Before committing to riding as a passenger, it’s worth spending a few moments seriously considering: just how much do you trust the person who will be controlling your speed?

I got off the mountain coaster feeling giddy, lit, somehow lighter... and already eager to get back in line to ride another bolt of thunder down the mountain. If you’re looking for a mix to get you pumped for flying down the mountain, here’s a playlist of tunes that got me revved.

You're likely to work up an appetite so be sure to check out the Crazy Horse Bar and Grill in the Lodge at Berkshrie East with a full bar and outdoor deck overlooking the mountain.